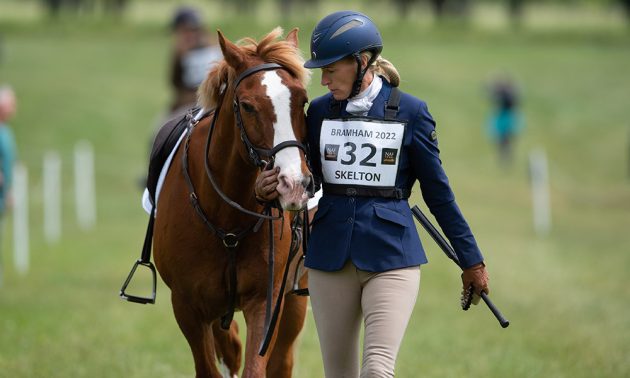 Top of the class: Philippa Skelton

Teacher, property owner, mother… Philippa Skelton has her hands full but can never resist the pull of eventing. Here she talks about life and her surprise Bramham win

A hitched ride to see an equine physio transformed into a moment of glory for Philippa Skelton, as her chance meeting with Brian Boru III led them on the path to victory.

Philippa was preparing to take her own horse for some treatment when fellow owner Julie Glynn asked if she’d mind taking her and ‘Bo’ at the same time. And making space in her trailer proved to be more than simply a good turn, as the 48 year old instantly hit it off with horse and owner to rekindle a former love for eventing – starting a sequence of events that saw Philippa and Bo win this year’s NAF Five Star BE80 National Championships at Bramham.

“Julie had Bo in a livery yard and the owner of the yard had told her she needed to get his back looked at, so I agreed to take her,” recalls Philippa. “When I saw Bo, I fell absolutely in love with this little ginger horse; I just thought he was brilliant. So I asked Julie if she’d ever taken him to competition and when she said no, we decided to give it a go. “We took Bo to a local show to do the mountain and moorland on him and he was champion of the whole show.

The next goal was to take Bo eventing, as the new friends set about entering competitions across the south-west. It was a union that whisked Philippa back to her younger years when she used to event regularly at Novice level with her own horse, until the pressures of starting a family and a career meant that she got out of the habit. But that love for eventing hadn’t died. A few forays on horses she’d borrowed had kept her appetite satiated, although given the chance to compete with Bo on a consistent basis, any thoughts Philippa had about that part of her life being in the past were soon forgotten. 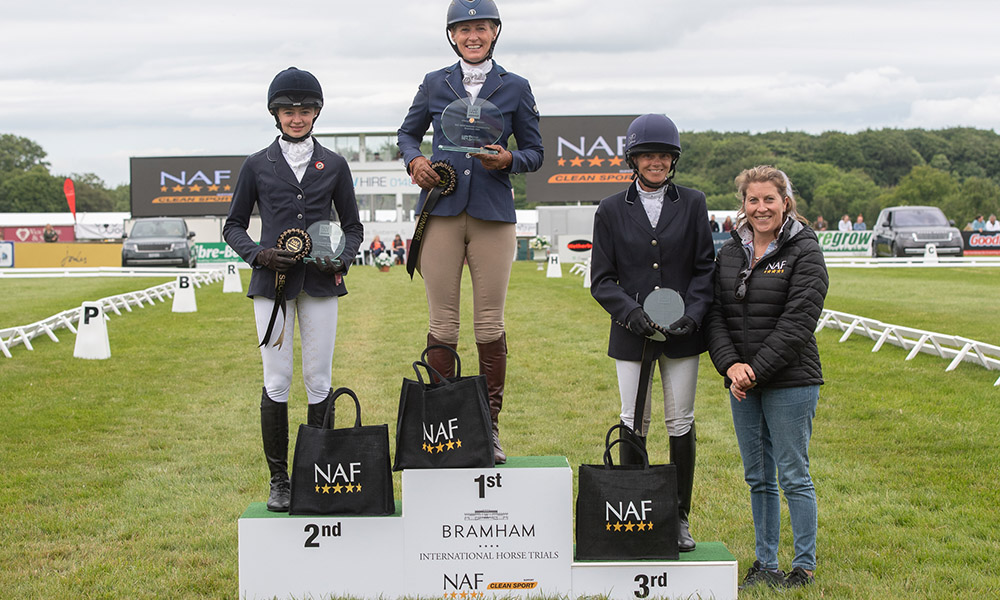 “A friend of mine had a lovely bay mare called Smartie and I used to do a bit of eventing on her and competed on other horses too, but I didn’t have much success. One of the horses was very nappy, so I got eliminated in the show jumping a couple of times. I was desperate to be eventing, it didn’t matter about winning, it was about taking part.

“When you do have a break, it’s quite hard to get back into it because you’ve really got to commit to it, with the resources, time and money. I thought my eventing days were over and then this opportunity came along.”

Reigniting that passion for eventing is all well and good, although with a career as a part-time teacher and 10 Airbnb homes in Chew Valley to look after, Philippa is always on the go. Juggling priorities is a familiar issue for riders and with her own horse to care for too, time is a luxury she doesn’t have much of.

It means there isn’t much opportunity for Philippa to ride Bo outside of competition, but that doesn’t stop her getting her own type of equine escapism whenever she can.

“I’ve never not had a riding hat throughout my life and I’m just so lucky to have riding as a hobby because it keeps me sane,” Philippa says.

“Simple things like going out and poo picking is my way of getting away from all of my Airbnb issues, the kids or marking books – it’s my way of having some time on my own with me and the horse.

“I have to put my phone down when I’m riding because I don’t have those breeches that you can put your phone in. I leave it in the car so when I’m riding there’s no distraction. My husband always complains that he can’t get hold of me, but I think I’d go mad if I didn’t have an hour where I don’t have to check my emails or answer questions. Even doing the simple chores around the yard keep me sane.” 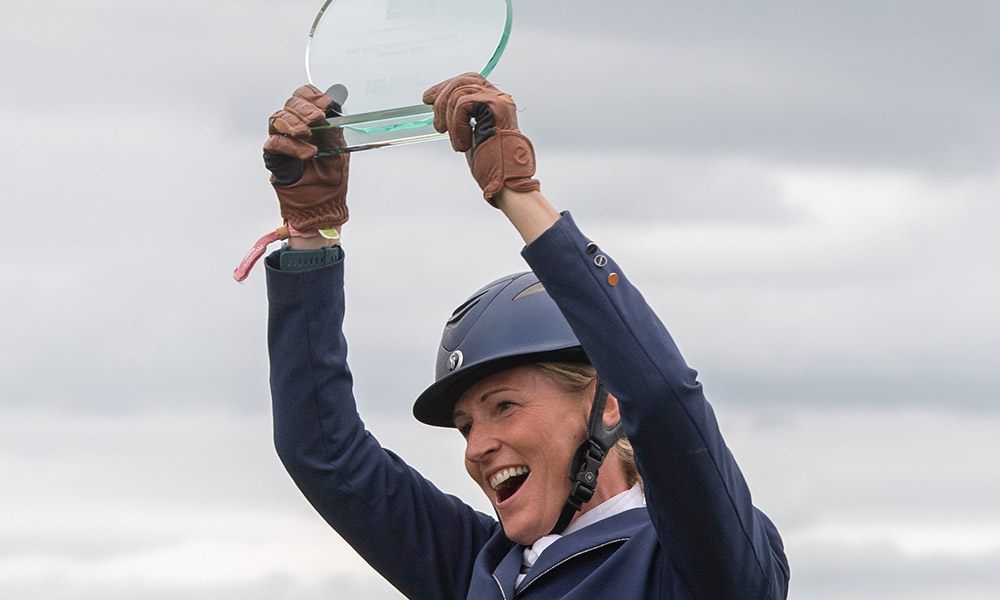 A lack of time together doesn’t hinder Philippa and Bo’s performance, though. Julie keeps him fit by hacking him around the woods, while a caloriecontrolled diet means he’s always in top shape for when they fancy entering a competition. And with Julie’s sister-in-law, Nic, also a keen event rider, there’s a team of people on hand to pitch in when preparing for a big date in the diary.

Luckily, Bo doesn’t need much training and with a circus stunt horse for a sire, is a born performer. Show him his stage – or dressage ring – and the entertainer in him spills out.

“Occasionally, I’ll sit on him the day before a competition, but he doesn’t actually benefit from being schooled lots,” Philippa says. “He finds it boring, which is why it works well that he’s a performer because as long as he’s fit, you just sit on him and he performs. Bo is one of these that you don’t have to practise over and over again; he’s quite special like that.

“It does mean Bo has been quirky in the past and we’ve had occasions when he’s had a refusal at a tiny fence and I’ve fallen off him probably six times – mainly in the practice ring.

“A couple of years ago, when we were first starting to compete, he didn’t like practising in the practice ring, so dumped me quite a few times and I had to see the doctor to make sure I was alright. Then I’d go back into the ring again and he’d have a clear round.

It was one of those sparkling rides – at Pontispool – that saw the partnership earn qualification for the NAF 5* BE80 National Championships at Bramham, although they hadn’t initially realised, such was the focus on simply having a good time.

And despite reservations about making the five-hour trip to Yorkshire to take part, the ‘amazing opportunity’ to compete at such a well-respected venue was too much of a pull, so Bo and the team made the trip in June. Their ethos was simply to have fun and enjoy the camping and shopping facilities on site, but when their star turn started showing his quality again, victory suddenly became a possibility.

“I hadn’t put a huge amount of preparation in place beforehand because I’d been quite busy, so I don’t know if there was a bit of luck involved or not,” Philippa laughs. “Bo can pull a really good dressage test out of the bag when he wants to, so we were lucky he was up for it and fancied it on the day.

“He’s just amazing at jumping, so I let him get on with it really, but to not have one pole down was the most tense pressure of my life, I think. The cross country was so twisty and I was really worried about the timing, but it was all brilliant and worked well.” 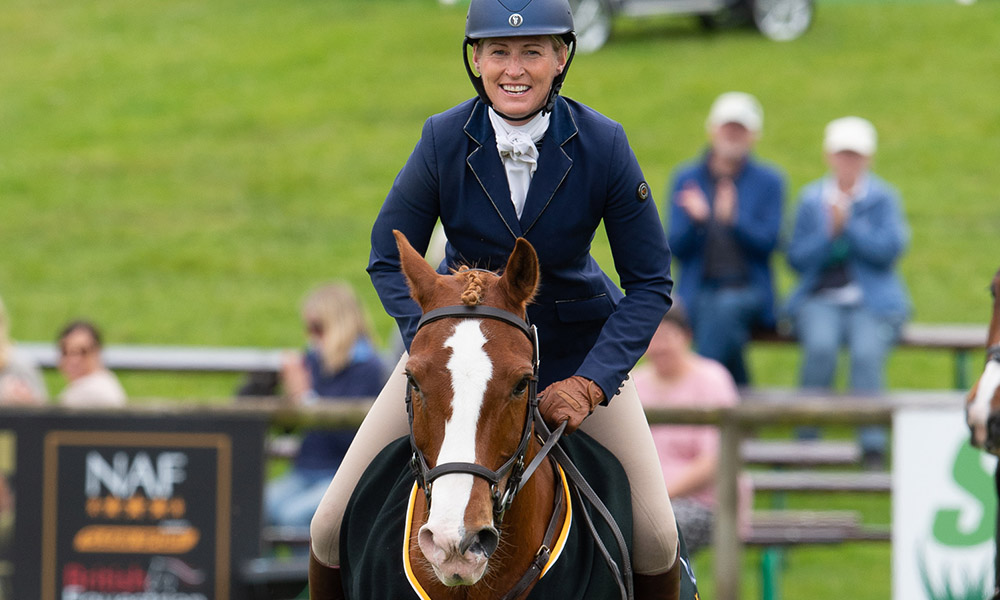 STARS IN HER EYES

Philippa and Bo were in third place after posting a dressage score of 29.8 and put in a faultless cross country to stay on that score to take top spot.

The added prestige of being at the championships on a busy weekend of competition made the achievement even more special.

“The fact there were so many of the big event riders there made such a big difference,” Philippa says. “And then the prize giving taking place in the main area with all the spectators was just incredible. I didn’t realise that was going to happen and thought while it was at Bramham, we’d be in a separate area. To be in the main arena was absolutely amazing. The park itself was just incredible and beautiful, really stunning.

“Finishing in one of those top three positions almost made me feel like a celebrity because we did lots of interviews and everyone was taking photographs, and I absolutely loved that. Maybe, on some level, knowing I could be in that main arena with the rug was the spur that pushed us to win.” After sampling the big time this year, does Philippa plan to return next year to retain her title?

“I’d love to,” she considers. “But it’s quite a bit of pressure and I would kind of like to do a mic drop and never do it again to make sure I finish on a high. I’ll have to think about that over the next six months and see if I’m going to go for it again.”

If the carefree and impulsive approach that served the duo so well this year is anything to go by, there’s no reason why they couldn’t leave that decision until the latest possible moment. 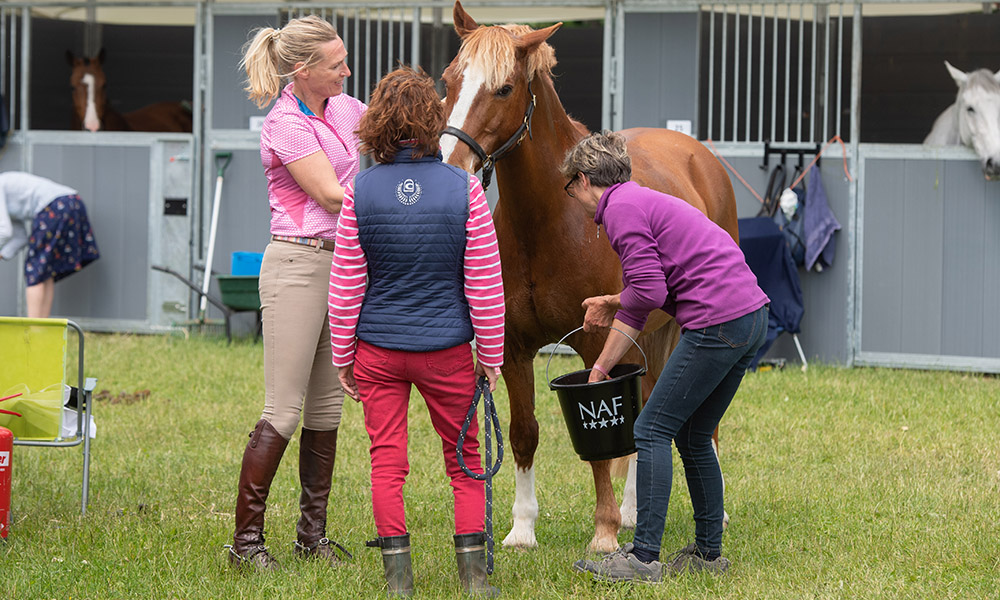 “It was a superb event in a lovely place; Bramham has spectacular scenery. From the first moment we arrived, all of the volunteers were so friendly and helpful, which made a big difference, and the whole event was extremely well-run and well-organised. The course was great, particularly the cross country – and even though it was an 80, it was a testing course, which was great.

“It was a long journey for us to get there, but it was worth the effort, particularly as we were competing against 57 other horses who’d won to get there, so it was the crème de la crème for us in the 80.

“At the end, with the championship presentation happening in the main arena, everybody was so welcoming and there was a huge response from people who were watching the favourites. It was hugely encouraging for everyone who took part to aspire to do more.

“It’s massive for everyone competing at this level to be able to have experiences like that because it gives them something to aim for and qualify. We weren’t doing it to win necessarily and just wanted to have fun and have a good time – the fact we even qualified for Bramham was a complete bonus and we jumped at the chance to go.

“Four of us went along to enjoy it because it’s a real team effort to get Bo ready for competition. We’re just over the moon with the result, but even if we hadn’t won, we’d still have said it was a brilliant event and made us want to do more because it was so fabulous.”