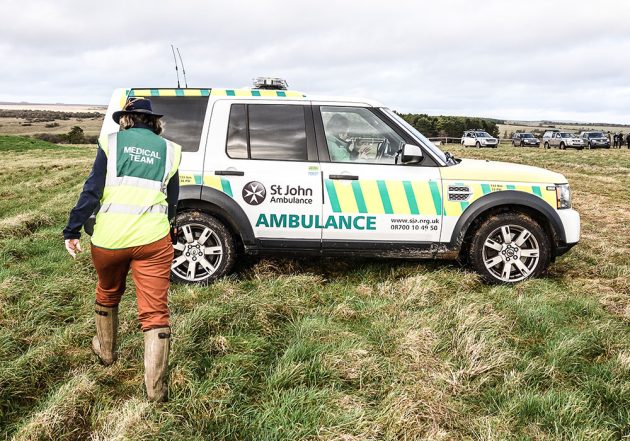 If there’s one woman you want by your side after a fall, it’s Katharine Hartington.

Having faced the horrors of field hospitals in Afghanistan and Iraq and been on the frontline of a busy emergency department, very little can faze British Eventing’s chief medical officer (CMO).

And now Katharine is putting that experience to good use, as she and her team of medical experts aim to complete her next mission: making our sport as safe as possible.

“I’ve seen a lot of trauma and I’ve seen the life-changing results of serious injury,” Katharine tells British Eventing Life. “If we can do anything that reduces that in eventing, it’s worthwhile.” Katharine’s message is delivered with the juxtaposition only a seasoned medical professional can muster. She’s bright and friendly, but her words carry the steely seriousness that makes ears prick up.

Katharine’s role is a voluntary position but isn’t something she’s taking lightly. Her mission is to improve standards across the sport, making sure every British Eventing affiliated event is held to a high bar to reduce the risk of serious injury.

“Because I was in the military and an emergency medicine consultant, I’ve dealt with a lot of trauma. I train doctors for trauma training so that’s a passion of mine,” Katharine explains.

“That’s why I wanted to do some training for doctors for eventing or horse racing. So I started working with the Medical Equestrian Association and started doing more and more with British Eventing – and that’s when I was asked if I’d take over when the previous CMO, Judith Johnson, retired. 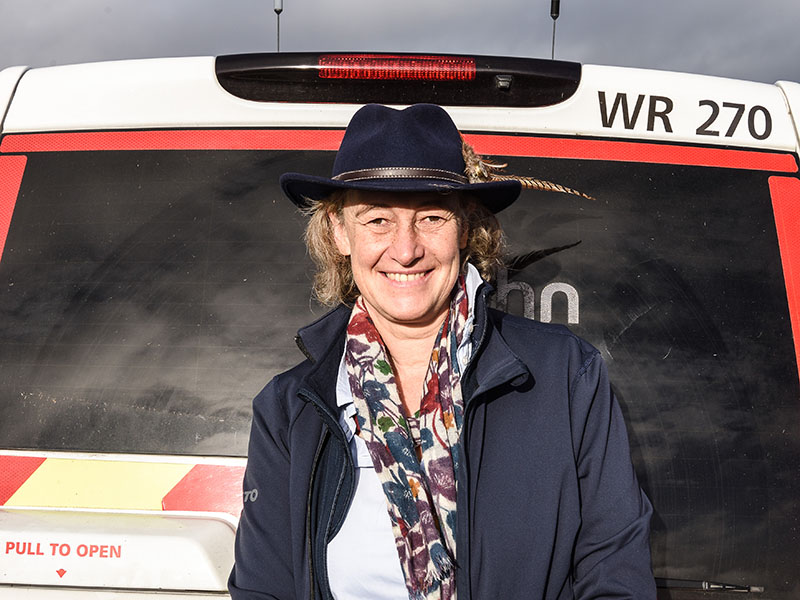 It’s a big job, but if anyone is up to it, it’s Katharine. After retiring from her position as a colonel in the army in 2021, she’s got more time to dedicate to the task, alongside a position as a part-time emergency consultant at Queen Alexandra Hospital in Portsmouth. But it’s her time in the military that makes her such a valuable asset, having worked in some of the world’s most precarious countries.

“We were at the forefront of dealing with trauma and how we responded to it. When I got back, I became the clinical lead for the Wessex Trauma Network in the NHS so I could improve the treatment of trauma generally in the NHS.

“Being in the military taught me the importance of teamwork. We had a fantastic team out there. It’s not just one person being good though, it’s everyone – right from the point of injury and what you do on the field, how you treat them in the ambulance and in the hospitals to the rehab.

“That’s what Afghanistan really showed me. There was some horrific trauma out there, but we had a fantastic team. It’s about how the team bonded and worked together.

“You’ve got to have good leadership, but everyone needs to have a good understanding of what they need to do and where they can do it – and the right tools to do it.”

As Katharine begins to speak about enhancing British Eventing’s medical cover, the echoes of those military lessons reverberate loudly.

Having appointed Craig Harris as Honorary Chief Paramedic Officer and Jonathan Forty as Deputy Chief Medical Officer at the end of last year, the team are teeming with experience.

Consistency is the watchword for them as they instil uniform methods to be followed across all events at every level – from grassroots to elite – around the UK. So should a serious incident
happen on the course, the response is immediate and seamless.

“Everyone is taught the same system,” Katharine explains. “So if I go out and work with a paramedic that I’ve not worked with before, I have a reasonable expectation that he or she will have the same thought process I do. Checking the airwaves first, then checking the breathing, then checking the circulation, there’s a set pattern of how to do it.

“This is why I’m keen that the paramedics and doctors who respond to BE have got some of that training. Some of us have that due to working in that environment, while some doctors don’t have that background but do the training and work hard at it, so they are effective out in the field.”

No stone is left unturned in that preparation. As well as laying the groundwork with the theory, Katharine puts trainees through their paces in tricky situations because ‘working out in the field when it’s raining, cold and someone is in a ditch is very different to working in a nice, clean hospital’. 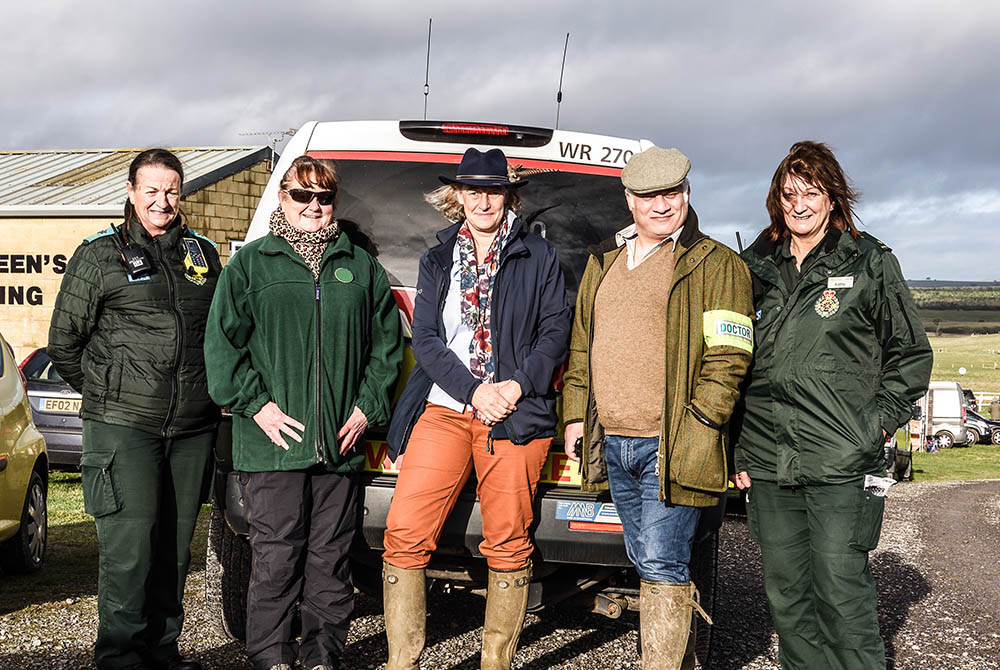 Having an experienced team working to the same system is essential. Photo: Nick Dawe

And it’s that attention to detail where BE’s events are benefiting. Every eventuality is considered, with strict rules put in place, such as a hard stop on competition if all the paramedics and doctors on the course are involved in treating other injured riders.

Other minimum expectations are in place too, including having an ambulance on hand to cover the show jumping and at least two first-trauma responders out on a cross country field. Blanket rules aren’t put in place for all courses though, with the flexibility for requirements to be adjusted according to the terrain.

“There are some courses that are easy to get round and you can see all of it easily, so you can always have someone in the centre who can get to every jump within 30 seconds,” says Katharine.

“But there are other courses that go up and down, in and out of fields, and around it. You’ve got to have more doctors or paramedics on the course because it takes longer to get to all the fences simply because of the geography.

“That’s so important. We know that if oxygen we’re looking at disability or death, so we need
to have a response to a major fall with a possibility of airway or breathing problems within that time.”

Katharine admits her dream scenario would be to have a paramedic on every fence of a cross country course but realises that’s not a feasible solution, so looks to find a balance that provides the best possible cover. Education is key to backing up any physical methods the medical team put in place, and not just for the doctors and paramedics on the scene.

A focus is being placed on helping riders understand the risks of big falls and how they can avoid suffering serious injuries. The medical work plugs into other BE projects, such as those done by equestrian consultant Jonathan Clissold, who is looking at the types of falls that commonly occur and how riders can try to control them to reduce injury. 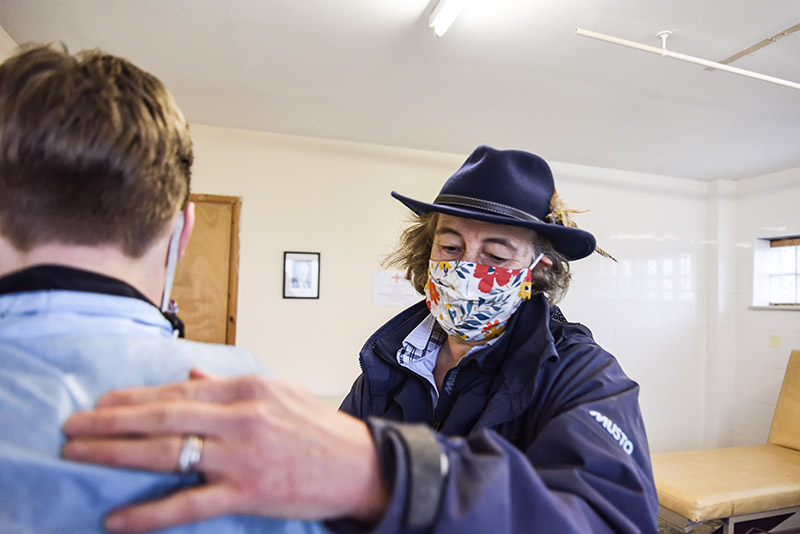 Having a set process to diagnose riders at events is crucial. Photo: Nick Dawe

Concussion protocols are also high on the agenda, with Katharine representing BE in forming a unified approach with all forms of equestrian sport when dealing with head injuries. Although a cultural shift is needed to have the biggest impact.

“I can sit and educate the doctors and paramedics, that’s not difficult. But it’s educating the public and the parents, educating the riders,” Katharine says.

“We’re all used to riders saying, ‘I’m fine’ with the focus on the pony. We often say for them to put their horse away and come back because after 20 minutes we find the adrenaline has gone and it’s then that riders find they can feel the pain or can’t function properly.

“That’s why we tell people we’re not clearing them until they see the doctor after a period of time. Then you can have a sensible conversation with them about what is realistic and where to go from there.”

While there’s no way to guarantee severe injuries don’t occur at any event, the measures put in place by BE’s medical team stand out when compared to the reality of an event without any regulation. That’s what concerns Katharine most when it comes to rider safety, with riders seemingly unaware of the heightened risk that competing at some unaffiliated events can bring.

“You could go to an affiliated event at one of the well-known venues on a weekend and there will be two doctors, two paramedics and properly equipped ambulances, with everybody working to the same protocols and procedures,” she adds.

“Some [unaffiliated] events do make sure they have the same amount of cover, but there’s no regulation of it – there aren’t the same minimum standards. These are stipulated in BE rules.

“If a doctor doesn’t turn up or there aren’t paramedics there with the right qualifications, there have been times when BE events have been put on hold until it’s been sorted. That might not necessarily happen at an unaffiliated competition.”

It’s a stark reminder of the risks involved in the sport. At least with BE, Katharine and her team will be there by your side. 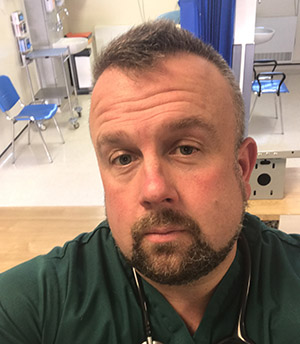 Craig has joined the team as Honorary Chief Paramedic Officer, bringing with him a vast amount of knowledge and experience to the role, both from the equestrian world and beyond.

Having ridden from a young age, Craig currently owns more than 20 horses and is passionate about the sport, though freely admits dressage is not his strong suit: “No one needs to see my arms flapping around wildly,” he says.

Craig has been providing paramedic cover for BE for almost 20 years and has big plans, including advancing the scope of the paramedic cover, providing better service for the riders and making the sport safer for all.

“I will be providing a standard point of reference for how paramedic duties should be carried out at BE events right across the UK. I’ll also be supporting organisers in arranging their medical provision and providing advice for medical companies who may not have covered a BE event before, helping to bring new talent into the sport.”

For Craig, having a chief paramedic officer is key for BE: “Paramedics have a very different skillset to doctors, working under pressure and making decisions quickly, on the ground. Paramedics are absolutely vital to the medical care delivered by BE and I’m honoured to join the BE team.”

Surgeon Jonathan Forty has provided trauma care at many BE events

An incredibly experienced cardiothoracic surgeon with a strong background in training, Jonathan Forty is currently the National Programme Director for Advanced Trauma Life Support for the Royal College of Surgeons of England. He is involved in the training of doctors in trauma care and as part of the new BE team, he will provide training for doctors and paramedics to ensure even better care for injured riders.

Jonathan is a keen supporter of BE and has been involved in providing medical cover at events from grassroots level through to international competitions, such as BlairCastle, Somerford Park and Burgham.

“Eventing has been my wife’s sport for years,” he says. “We love the sport and have made some very good friends, so it’s great to be able to bring my expertise into the eventing community.”