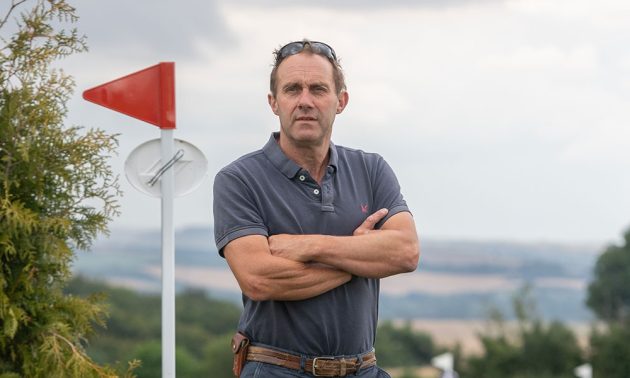 Adrian Ditcham’s secret might come as a surprise. But it’s not the cross country course designer’s revelation about the top skill that makes him one of the most revered in the business that shocks. It’s the simplicity of his secret instead.

“One of the really important things about course designing that people forget is you have to watch horses jump,” Adrian reveals, as British Eventing Life pries for that hidden talent, only to discover the equation is much more elementary.

“The more horses you see jump, the better you are at understanding what they need. I’m fortunate that I see a lot of horses jump every weekend and watching them is really key to creating the right course for them, right from the lower levels up to 5*.”

Of course, the adage that it’s easy if you know how is relevant. A former event rider at Advanced level, Adrian’s eye for what horses need when competing at cross country has been honed over several decades.

After setting up his own course design and building business in 1992, his craftsmanship has been put to the test at several event and training courses down the years, including as part of the team to construct the 2012 Olympic Games track in Greenwich and as designer at the Boekelo CC14*L since 2019.

No course is the same

But whether it’s for the pinnacle of the sport or for grassroots combinations, the need to treat each course individually and not lose sight of what is required is crucial. It’s, ahem, horses for courses.

“Horses at the top end travel quickly and steeplechase speed is up to 600 metres a minute,” Adrian explains.

“Some of these top horses are coming down into fences at 350 or 400 metres a minute, so their span between when they take off and land can be anywhere up to four or five metres long.

“That makes a huge difference to the fence you have underneath them and the distance between the fences. So when you watch horses jump fences at 80 or 90 centimetres, they’ll jump them in a very different way. It’s about how you walk those distances and create those types of fences and you can only get that instinct from watching horses run BE80 and BE90 up to Advanced.

“Riders do a different job as well. Some riders ride very forward, whereas others ride defensively and you have to pitch that at the right end. As you go up the levels, the margins for error are a lot smaller, so you can’t afford to get it wrong.” 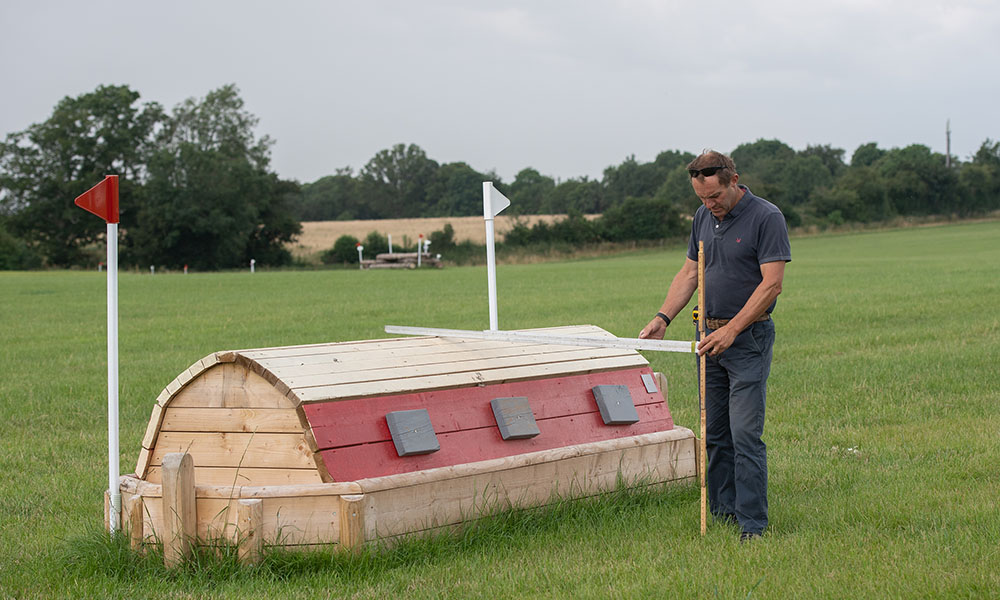 Making sure fences are fit for the standard is just one of Adrian’s jobs (photo: Adam Fanthorpe)

Any project has to start with a brief. And Adrian points out that mixed messages with a course owner at the initial planning stage can result in troubles further down the line.

Understanding the primary use of a course, the level of the riders and horses it’s aimed at and the costs involved with creating certain jumps or sequences is a key building block for any designer. Once that’s established, the more creative aspects can come to the fore.

“If somebody knows their customer base, it’s a good thing and means we can bounce ideas off each other. Although the first thing to do is make sure everyone’s feet are on the ground because it’s not a cheap exercise, whatever you do,” Adrian says.

“Whether you’re creating a field full of portables, putting groundworks in for a sunken road or lining a water jump, it’s all going to cost a certain amount of money, so it’s about setting out with realistic aims and getting the best value for money.

“You need to make sure the fences are right – that’s where the brief comes in – because there’s no point building 50 one-metre fences when what you really need is a whole field of 60cm jumps because that’s what all the horses jump.

“From there, it’s normally an organic process. I’d say, ‘this is where I think a jump should go’, for example, then we talk about long stretches and areas where there can be more of a sunken road, while also keeping an idea of what we could do in the future. We lay the ground rules and then as you start to build, you get a feel for it.”

The demands may be different for building training and competition courses but the process remains the same to bring those early sketches and ideas to fruition. 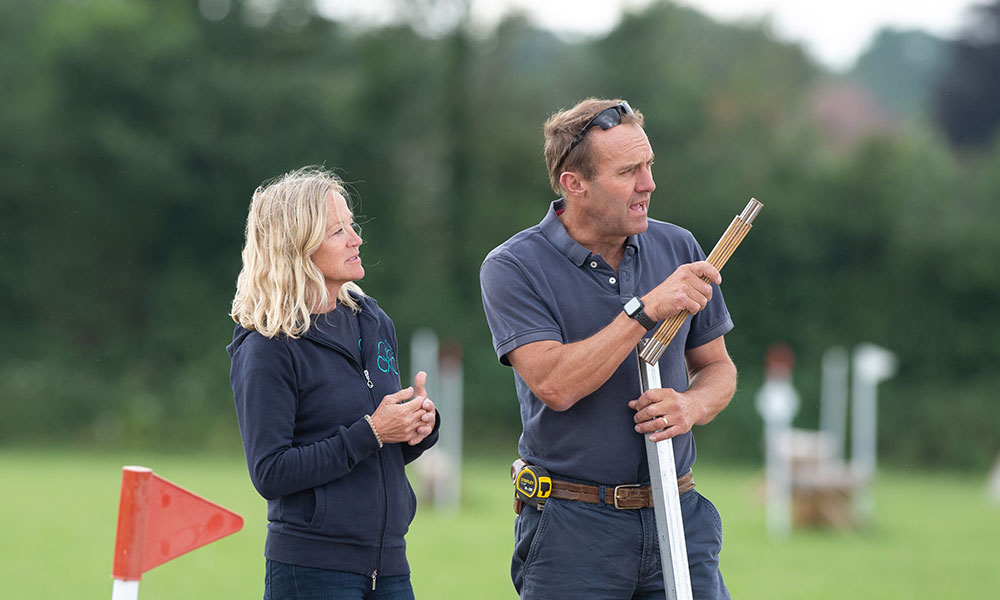 When BEL meets Adrian, he is showing us around the Chiltern Cross Country training facility in Oxfordshire, which he recently worked on, and illustrates how course flow wasn’t such a big consideration there. Once more, it comes down to knowing the riders’ requirements, with the tendency for training jumps to be used in isolation or not at full pace, whereas a competition course needs to be more continuous.

Yet regardless of the course’s use, positioning major obstacles – such as the water, steps and ditches – is the first task to provide the structure to work the other jumps around. Although on more-established courses, certain constraints may already be in place.

“Depending on the venue or organiser, your start for the cross country in a competition environment has to fit around the rest of the site,” Adrian explains.

“If you consider how Badminton and Burghley work – even Chatsworth or the next level down – they’re show sites and usually there’s only one place the start can go. It might not necessarily be where you want to start, but that’s where you have to and you have to tick all the boxes and say, ‘if I’m starting here and have to end up here, then where have I got to go, where can I put my water and where can I put all the features within the track?’.

“You build it up with a start and finish, water and fixed fences and add more layers as you go. It’s about lines. I’ll walk a track first and if it walks nicely, it will usually ride nicely, then you put the fences there. The flow and the line are more important than the fences in the first instance.”

That was one of the tasks facing Adrian when he was part of the team headed up by Sue Benson to build the London 2012 course. Being housed in Greenwich Park, one of London’s most-visited green spaces, there were several impediments the designers and builders had to negotiate.

“With a big job like that, the designers rely on their builders to help create what they have in their heads because we know what can be built and what can be done on that landscape,” recalls Adrian.

“Particularly with Greenwich, that was difficult because we could only go to certain places in the park because of the trees, paths and everything else. To create the course, what we started with in 2009 was not what we rode in 2012 – 90% of it changed from start to end.

“We’d say, ‘we can go there, but if we do and build that type of fence, then we can’t go there’. The whole thing just evolved.

“If you think about the Games and take Tokyo as an example, there was an American designer and a British builder, who is also a high-level designer, so that whole process is completely organic. They would have sat down at the table, had a test event and then found out what worked and gone from there.” 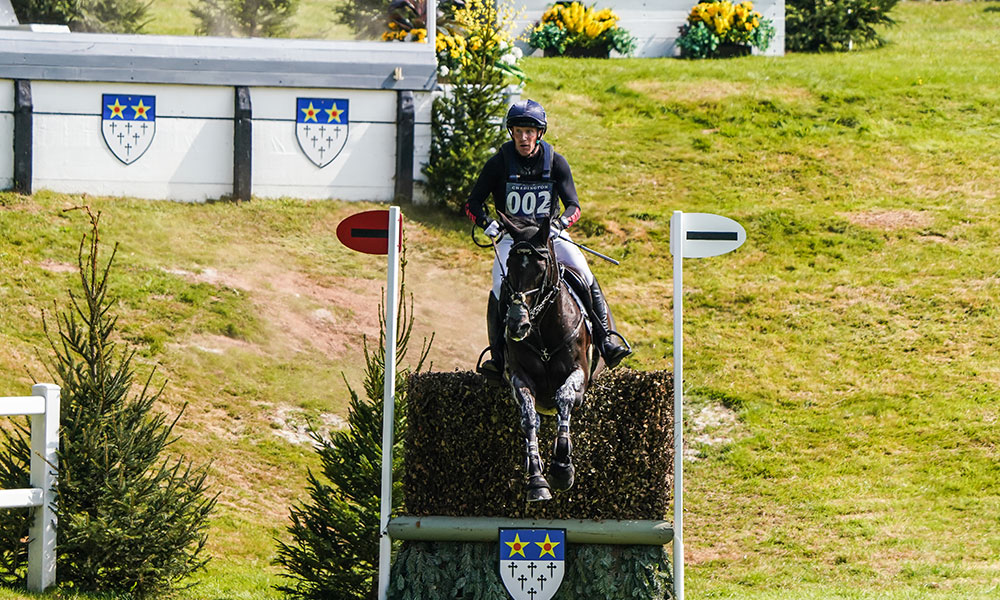 Adrain was on the team that designed the Bicton 5* in super-quick time earlier this year (photo: Hannah Cole)

It’s been a similar challenge for Adrian throughout 2021. He joined up with Captain Mark Phillips to put on the 5* event at Bicton in September. It was no mean feat. The Devon-based arena held a 4* in June, so there was less time to make the usual changes once the initial vision of the course was created and decisiveness reigned supreme.

Across the weekend, thousands of spectators took to the course and while Bicton lacked the usual raft of shopping options visitors are used to at more-established 5* events, such as Burghley and Badminton, the sport went down a treat.

“We ripped out the 4* course and built it back up again,” Adrian says. “We turned the whole track round, so we went in a completely different direction, which adds its own problems because the hills come at a different time and you’re running a slightly longer track.

“It’s incredible how over that 6,500 metres, with an elevation gain of 120 metres, those horses will cook and completely come off the boil, which impacts the fences you have to design. The track we laid out was every bit as testing as other 5* events.

“It’s not a rushed project, it’s an intense project and in some ways, the short time frame took away some of the stuff we’d be endlessly changing on the course, which all designers do if they have the time.”

Gauging the right level for the course is one thing, but making that a reality is another entirely. It’s not as easy as using a set of jumps at a specific height and laying them out; the designer’s role is to educate the riders and horses that will be taking them on – especially at the grassroots level.

A good event runs the rule over a combination’s skills to compete at that particular grade and it all starts within the mind of the person creating the course.

“As designers, we like to make sure the education of the level is from the start box to the end. So we ask the right questions and we test the skills they have – that they should be able to jump down a step to a log, for example, which they have done in training,” Adrian says.

“We’re testing those skills within that high-intensity environment. Within all those levels – 80 all the way up to Advanced – there has always got to be a certain amount of education. Until those horses go to ride round the Olympics, their education isn’t done and they’ll always learn something wherever they go. As they progress through the grades, there’s a whole process we give them through the sport.”

That brings up another of Adrian’s trade secrets that he believes help him stand out. And it’s something he says many designers forget as they busily get on with perfecting their courses.

“People don’t speak to the riders, which is something I try to do,” he adds. “I’m thinking of the top-end riders because that dialogue with them and coaches is key – if we’re not designing what they’re training the horses to do, there’s a disconnect.

“We want to keep something up our sleeves, but we have to know it’ll work. There are certain riders who I speak to more because they have a good grasp of course design and will offer an unbiased opinion that doesn’t depend on the horse they were sat on that day or the results they’ve achieved.

“These people are putting their lives on the line at the top end, so if something isn’t right, they need to feed back to us to make sure we’re getting that.”

It sounds so simple. But then Adrian usually makes it seem that way.

Chiltern Cross Country (CXC) opened in South Oxfordshire in March 2021 and has proved to be hugely popular with grassroots and professional riders. Designed and built by Adrian Ditcham, there are more than 80 flagged fences ranging in height from 60cm to 100cm. Set within 30 acres of well-drained pasture, the course includes a large water complex, together with skinnies, corners, brushes, steps and ditches. Book online at chilternxc.co.uk