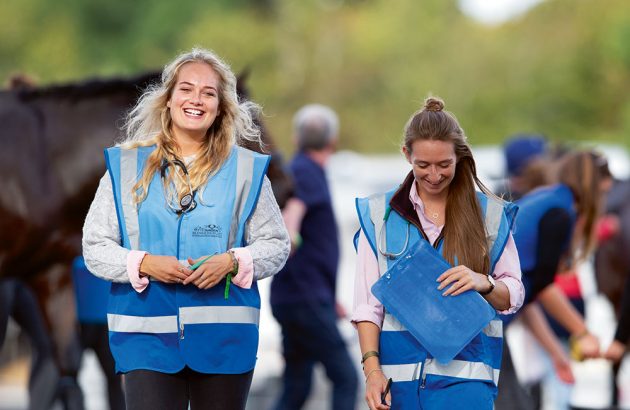 Volunteering: We’re in this together!

The eventing calendar would be nothing without our loyal band of volunteers. We caught up with a dedicated group to find out what encourages them to keep coming back for more.

Among the riders, horses and event organisers who take centre stage, there’s a less-heralded group that is the heartbeat of the sport. Our network of loyal volunteers is crucial to the successful running of events across the UK and their work does not go unnoticed. But what does a volunteer do and how did they first start helping out? We organised a video call with five volunteers to cast a spotlight on eventing’s hidden stars.

Q: Why do you love volunteering so much?

SG: It’s a fun life and I enjoy it immensely. There’s such camaraderie among all of the volunteers, it’s great.

SB: It’s everything about it because you can see eventing close up as well. If you’re working behind the scenes, you feel much more part of the event.

SG: I totally agree. My daughters have evented and so have I, but not to a very high level. It’s a real privilege to be a volunteer in this wonderful sport. 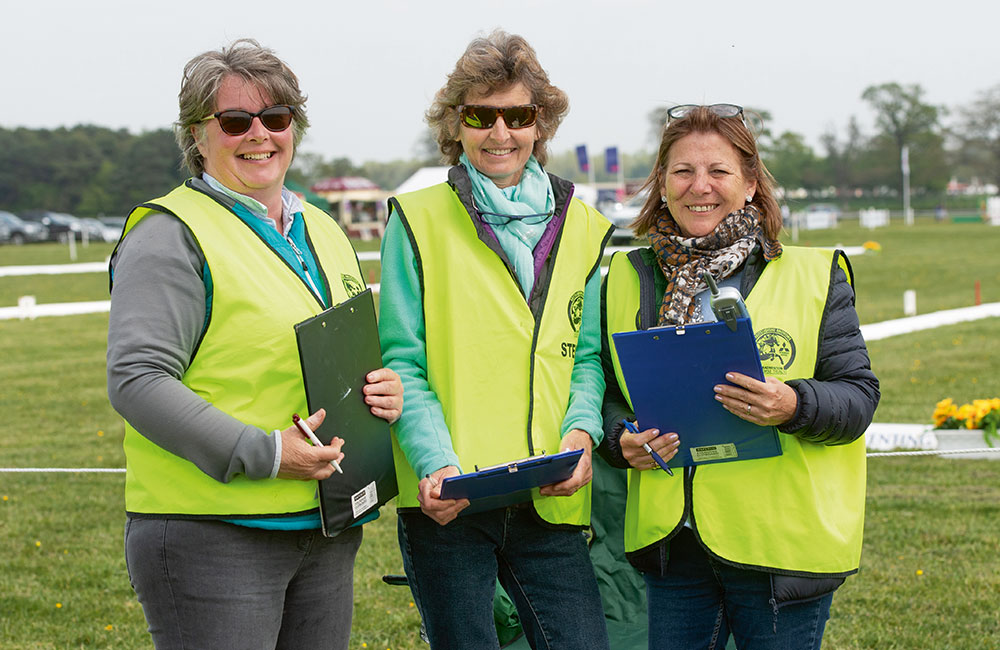 Q: Are the friendships you make an important part of it?

AG: I wouldn’t have met Carol, Sue or Suzanne without eventing and we’ve become good friends. Another scorer and I went up the Mekong on holiday together 18 months ago and had a great time – it just reflects the camaraderie and friendships I’ve found within eventing; it’s been tremendous.

CR: At the beginning of an event, you all get together and have a chat. Then at the end, all the volunteers, organisers and riders congregate. It’s a really sociable event and we’ve missed it – hopefully, things will get better soon and we’ll be able to carry on.

SG: The friends I’ve made, I would never have met without volunteering. We have a fantastic bond. It’s wonderful and so nice to be involved.

CC: The people you meet, from the riders to all the officials and the other scorers, they’re just such fun and we have a great time. It’s the social side as well as keeping the old grey matter going.

Q: How did you first get involved with volunteering?

AG: I was involved with the Pony Club and had a horse that was with a professional, so I saw it from the owners’ side. I was asked by Ann [Allen] in 2001 to help with scoring when they were short of helpers at West Wilts. I was fascinated to see the sport from the other side and working together for a joint outcome was a great feeling and one I enjoyed. It helped me understand the sport a lot more.

CC: I’ve ridden most of my life, but my daughter has competed at a high level, so I was a groom for her when she needed one. Volunteering was something I could do to put something back into the sport we love.

CR: I’m fairly unusual because I don’t ride, I’m not that brave, so I considered getting involved with the sport without doing the dangerous bit. Coming into it was fairly easy as my daughter events and I supported her before she became professional. I got to know a few people, then I got involved in volunteering after being asked to help. After one event, I was hooked.

SB: I got dragged in to help by the chief scorer who was looking for volunteers. I got stuck into adding up the dressage and I thought, ‘this is quite good’. I’m a maths dunce, but at the end of the day, the scorer said, ‘you seemed to pick it up quite well, can I have your details to put in my little book?’ and I never got away. 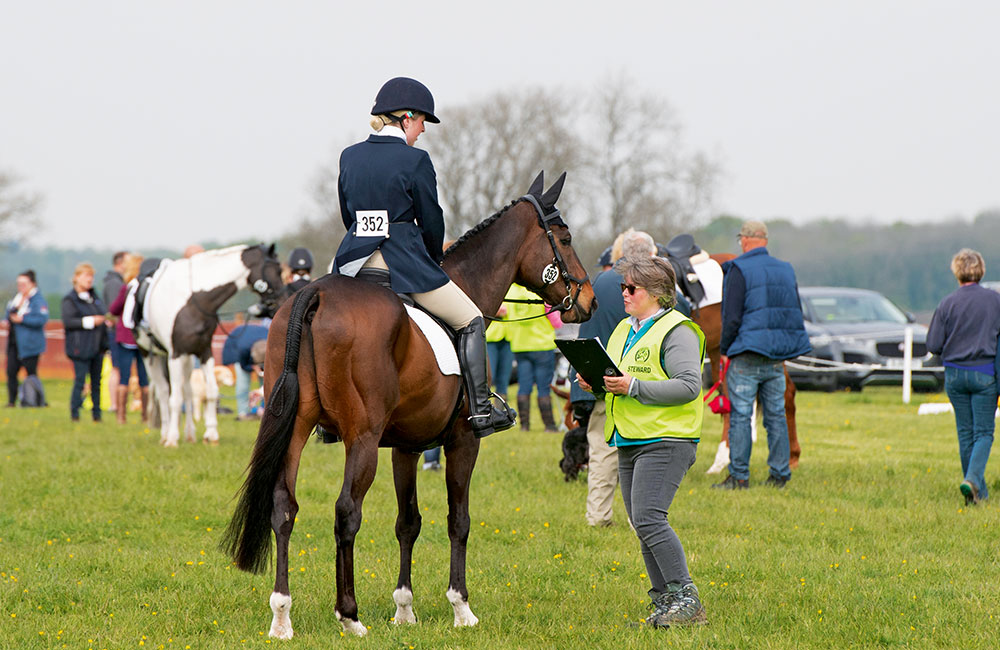 Q: What’s it like to welcome a first-time volunteer?

SG: One of the things I’ve found most enjoyable is enabling people who haven’t done scoring before to help. Halfway through the day, they’ve understood it – it’s a great honour to help somebody.

AG: We had somebody at West Wilts last year who had never done any dressage adding up before. She was horsey but not a professional and she was terrified when she first arrived, but by the end of the day, she was confidently adding up sheets accurately and entering them into the computer accurately. That was great and she came back the next day.

SB: That’s important because we do sometimes get somebody come in and say they’re not used to it, but I say, ‘I’m rubbish at the maths, but it’s not about maths, don’t think of it like that’. You sit and help, then you’re friends with them. You’ve all helped me over the years, that’s what it’s all about.

SG: With the scoring we do with the computers – I’m talking particularly about cross country scoring – it’d be helpful if we had somebody who would like to learn how to do it with you, then they take over the reins while you’re there to supervise. It’s a good way to introduce somebody gently to it because otherwise they might come and think they won’t do it again if it gets a bit frenetic.

Q: Other than scoring, what else can you do while volunteering?

CR: I’ve done all sorts. When I first started, I got given a crossing point and really enjoyed it. Then soon after they were short of somebody in the cross country collecting ring and that was scary at first, but I learned very quickly. Almost anything that’s needed to put on a good day’s eventing can be volunteered for. I’m part of a start-box team in the south-west that work together and we all know each other’s jobs, so if somebody is ill I can fill in for them and so can the other people in the team. I make the point of doing whatever job I’m given to the best of my ability. 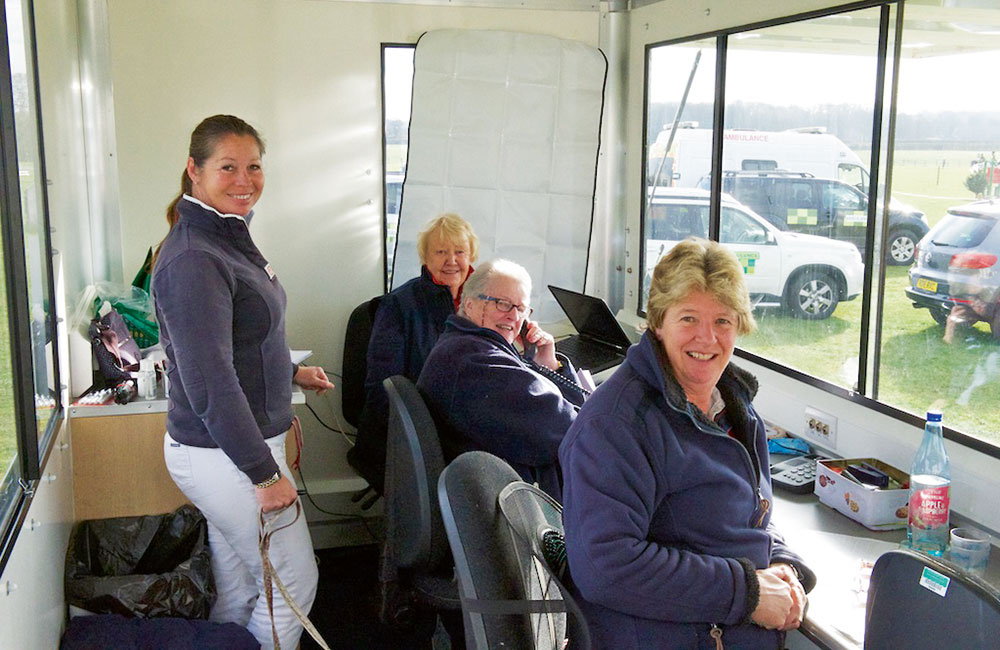 Q: What would your message be for new volunteers?

SG: Contact British Eventing, the scorers and organisers to say you want to get involved and keep trying if you don’t get results immediately. When I was organising jump judging, I was sent a whole list of volunteers from around the UK and they’d contact me to say they’d heard I wanted somebody to help at Tweseldown, for example. It’s about phoning up and finding out who to contact in your area.

CR: I’d recommend coming to volunteer at something such as Bicton and see horses going at one-and-a-half intervals and get involved with that. Come and see eventing for what it’s really like.

SB: You can get right up to the fences and watch all the top riders. When you’re writing up a scoreboard and you go out there, you could have Zara Phillips on your left side and Andrew Nicholson on your right and they’re looking at it, it’s just so nice.

CC: In the south-east region, there are a dozen of us who regularly get together in groups and we so look forward to seeing each other. We all just seem to gel and there’s nobody who doesn’t fit in – we just love it when others join in.

WANT TO BE A VOLUNTEER?

Find out how you can join British Eventing’s merry band of volunteers, wherever you’re based in the country, by visiting britisheventing.com/about/volunteer

This feature was originally published in the Summer 2021 issue of British Eventing Life.