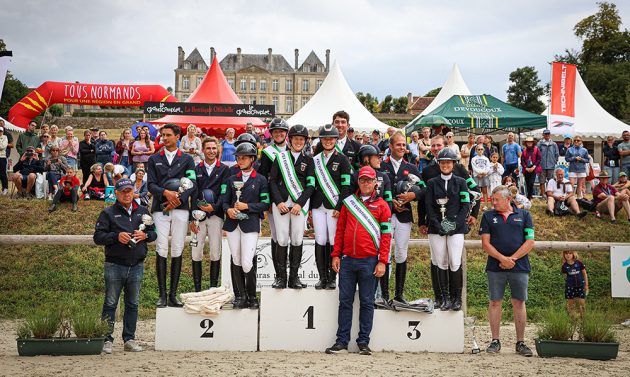 Top three finish for GB at Nations Cup in France

In August 2022, our British team competing in the FEI Eventing Nations Cup leg at Le Pin au Haras in France put in superb performances to deliver a strong third place finish in an extremely competitive field.

The team, which comprised Wills Oakden and A Class Cooley, Kirsty Chabert and Opposition Heraldik Girl, Mollie Summerland and Charly Van Ter Heiden and David Doel and Galileo Nieuwmoed, got the competition off to a good start, lying third at the end of the dressage. They followed this up with brilliant clear rounds over Saturday’s cross-country course to keep them well-placed in fourth.

“It was a really solid effort today from all four of our riders for clear rounds,” said Great Britain’s Chef d’Equipe, Philip Surl, after the cross country. “David cruised round well under the time, both Mollie and Wills were a couple of seconds over and Kirsty was really pleased with her young horse at this level.”

The team scores were extremely close for the second, third and fourth places heading into Sunday’s show jumping, with just one pole separating the three spots. The pressure was on but our British riders rose to the challenge, managing to jump ahead of the team from New Zealand to take the final place on the podium.

“This was a fantastic result for the team, especially with the quality of the teams that were attending,” said Philip.

“Many of the other nations were using this as a final trial and had all of their best horses on the show.”

In the CCIO4*-NC-S individual standings, Mollie Summerland and Charly Van Ter Heiden put in a fabulous performance to keep the pressure on the leaders Michael Jung and Fischerchipmunk FRH throughout the competition. They finished the dressage in second place, just 2.5 marks behind the German combination, and remained hot on their heels for the rest of the competition.

“It has been a really solid team effort from start to finish and, obviously, a great individual result for Mollie to have pushed Michael so close,” concluded Philip. “The organisers made a fantastic effort with the footing on the cross country, which made the ground perfect.

“A big thank you to all the owners, grooms and all of our connections for helping the team to deliver a really great result.”