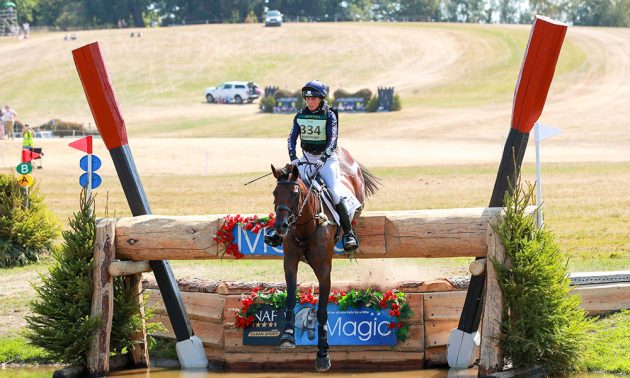 Vanir Kamira is the first-ever mare to win the CCI4*-S competition and also delivered her best-ever finishing score at an international event. The combination jumped an effortless clear round in the show jumping on Saturday morning, before storming around Eric Winter’s cross country track well inside the time – one of just four pairs to do so.

The 17-year-old Irish Sport Horse mare had looked outstanding on Friday afternoon, putting in a consistent test brimming with sevens and eights. The judges were particularly impressed by the walk and canter work and accurate half passes were also well-rewarded by the Ground Jury.

Dressage leader Ros Canter finished in second after having a rail down and picking up 0.8 penalty on the cross country with her Badminton runner-up Lordships Graffalo. She enjoyed two outstanding cross country rounds and two top-10 finishes with Pencos Crown Jewel having finished in eighth.

The only former winners in the field, Kitty King and Vendredi Biats picked Piggy and Vanir Kamira make Hartpury history up 5.2 time penalties on the cross country, meaning the galloping grey finished in third place.

Tom McEwen withdrew his Olympic ride Toledo De Kerser before dressage began but finished in fourth place with Bob Chaplin. Izzy Taylor and Monkeying Around had been in second place after dressage, but a rail down and 7.2 time pens dropped them to sixth.

Elsewhere at Hartpury, even a pole down in the final show jumping phase wasn’t enough to prevent China’s Alex Hua Tian and Jilsonne Van Bareelhof winning the NAF Superflex CCI3*-L competition. A dressage score of 25.4, followed up by an eye-catching cross country, placed the pair in a comfortable position as those closest to them faltered.

Ellie Fredericks and Pure Trendsetter moved up to second after a clear round on Sunday, while Emily Young-Jamieson and Obos Nidge and Alexander Whewall and Wisbeach Cevin Z Pride also moved up to third and fourth respectively after jumping clear.

More than half of the 3* competitors jumped clear rounds, but it was a different story for the 2* combinations during the morning session.

Kitty King continued a run of good form, winning the NAF M Power CCI2*-L with RSH Monbeg Marshall on a score of 29.4, a day after Kitty had finished third in the NAF Magic CCI4*-S with her galloping grey Vendredi Biats.

Jumping proved the name of the game and Sunday’s show jumping phase proved extremely influential in altering a leaderboard that had been largely unchanged after the dressage and cross country. With the top 10 so close after the cross country, even a time fault was costing several places.

Jason Wood and Nitor had led after the first two phases, but a rail down and 1.2 time pens saw the pair drop to eighth.

Just over a quarter of the 2* riders managed to record a clear around Paul Connor’s track. Clear rounds moved several pairs up the leaderboard including Great Britain’s Millie Toulson-Clarke and Tir Na Nog Shadow who finished second with 30.8, Ireland’s Danielle Mccormack and Billy Orinoco who were third with 32.3 and Tim Cheffings who finished in fourth and fifth place with Fanad West Callardo and Nadir De Leau respectively.