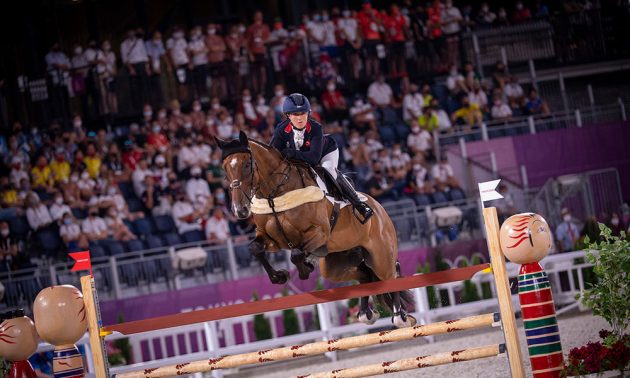 Television appearances, celebrity meetings and being recognised as she goes about her life; that’s just part of the ‘dream world’ Olympic gold medallist Laura Collett has experienced since returning from Tokyo.

Laura – who was part of the British trio who won our first eventing team gold at the Games in 49 years – says the past few months have been a whirlwind. as she comes to terms with her status as an Olympic champion. And there have been plenty of perks along the way, with invites aplenty and dates to fill up an already busy calendar.

“We’ve been invited to lots of very cool award events and nights out in London, and it’s just trying to fit everything in and enjoying the moment really,” says Laura. “A highlight for me was the homecoming in London with all the other Olympic athletes, which was amazing to be part of. I’ve been to lots of very different things, meeting lots of incredible people along the way – and not just from the world of sport.

“I went to the Woman of the Year awards and met lots of amazing women there from all different aspects of life, so that was incredible.”

Laura’s now no stranger to rubbing shoulders with several recognisable names and was also given the chance to film an episode of Question of Sport alongside boxing promoter Eddie Hearn and hockey gold medallist Sam Quek. But it was the presenter who had the biggest impact on Laura. “I’m a massive Paddy McGuinness fan, so to meet all these amazing celebrities was incredible,” she recalls.

“Going on Question of Sport was the strangest thing to be asked to do because I watched it growing up, so to be invited on that was amazing.”

Laura has found it’s not just her but her medal too that is in high demand. So when does she think she’ll finally be able to leave her new golden companion at home?

“All people want to see is the gold medal,” she laughs. “I realised quite soon after winning it that you don’t go anywhere without it because the first thing people ask is, ‘have you got your gold medal?’.

“When I met Martin Clunes, he said, ‘oh my gosh, can I see your gold medal?’ and he was totally blown away by it. I didn’t expect famous people to be in awe of what I’ve done or react like that to holding my medal because they’ve achieved so much themselves.”