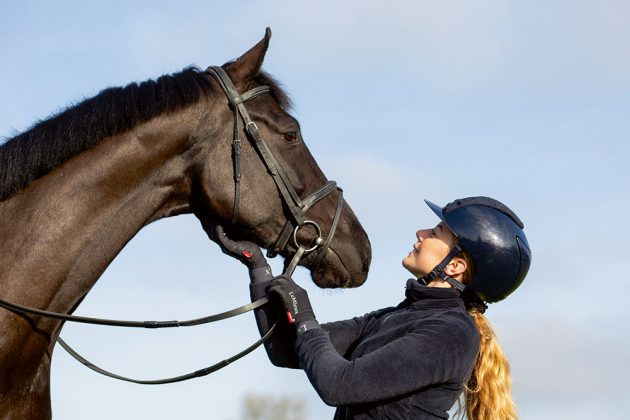 Despite the challenges she faced in getting to Luhmuhlen, which included spending 10 days in the Netherlands to quarantine, Mollie rode to victory on Charly Van Ter Heiden and firmly established herself as one of eventing’s stars.

Mollie and Charly had led the dressage, a phase they often excel in, and jumped the fastest cross-country round to retain their lead, before jumping clear in the showjumping phase to win the title.

At 22, Mollie is the youngest ever winner at Luhmulen, and one of the youngest winners of a 5* event, which makes her victory even sweeter.

For Mollie, the win still hasn’t sunk in. “I’m a young rider who has been quite under the radar so to go and do this, it’s a lot to handle. It’s been lovely but the attention from the press has been quite daunting, so it’s a balancing act of trying to enjoy the result and not be overwhelmed by the pressure and the media attention. It’s quite a learning curve!”

The trip saw Mollie and Charly take to the road for more than three and a half weeks in total, and felt very different to usual events as they had travelled without their usual support team.

“There were only a few British riders out there so we made a little family and they were great at giving advice when I needed it,” she says. “The British support staff, such as vets and physios, couldn’t be there so I spent a lot of time on my phone, sending them videos for their thoughts and advice.”

The extended road trip actually played to their advantage as Charly can be thrown off kilter travelling to shows, refusing to eat.

“Going somewhere that wasn’t a competition environment first was really beneficial for him. He could settle there and realise he wasn’t getting butterflies and could eat his food. By the time we arrived at Luhmuhlen, he was used to moving and settling and so adapted well and ate, which is always a good sign. Knowing that he was getting everything he needed from his feed was really reassuring for me.”

There was also a special moment for Mollie when she was able to meet Klaus Steffens, Charly’s breeder. “I think it’s really important that breeders get the recognition they deserve for all their hard work and all the thought process that goes into what they do. I’m still in touch with Klaus and for him, in his home country, to see a horse he bred years ago win a 5* event – well, you can’t wish for more.”

With such a huge victory behind her, what are Mollie’s plans for the future?

“I’d love to try and get onto a senior European team over the next couple of years and we’ve just been long-listed which is amazing,” she says. “But mainly, I just want Charly to stay sound and keep enjoying his job and if I can do a few more 5* with him, that would be great.”