Back in January, I thought 2020 was going to be ‘my year’. I had it all planned out – Sid was feeling better than ever, training was lined up and I was determined to go out, enjoy myself and have the best eventing season ever. Nothing could stop us.

After a disastrous second half of our 2019 season, I had regained my confidence at BE100 level and was planning to step up to Novice midway through the year. They say you shouldn’t put a green rider and a green horse together, but I have really enjoyed learning and moving up the levels with Sid. He was a blank canvas when fate threw us together, but he puts up with me panicking, flapping my arms and making an inelegant job of every dressage test I attempt.

I’m a lawyer (to fund my horse addiction) so I spent lockdown working much longer hours than usual from home. As soon as I woke up, I checked my laptop/phone and I was responding to emails at all hours. My yard was kind enough to give me a lunchtime slot in which to ride and I cherished that hour away from my screen with Sid. He got me through it. A lot of people feel that horses are their therapy – this was true for me. 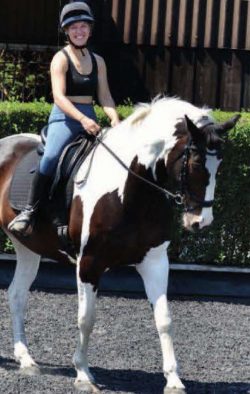 When it was announced that eventing was restarting, I was so excited! The first event I entered was Tweseldown. It was so well run and the organisers had done an amazing job of making the ‘new normal’ feel as close to the old normal as it safely could. There are a few improvements I would love to see become standard, including the quieter show jumping rings, jumping to time and printing off numbers the night before. Sid did a nice dressage test, had one pole down in the show jumping and stormed round the cross country clear and nearly within the time. We were back.

However, that hasn’t quite lasted. While our dressage test at West Wilts was a personal best (28.31), I managed to ride well for the first half of the show jumping, then hesitated at the first half of a double, causing demolition derby thereafter (four poles). Sid redeemed himself by making the cross country feel very comfortable, despite the inclusion of a trakehner (my worst fear).

A few days prior to the BE100 Plus at Stafford, we were attempting some show jumping when Sid’s shoe flew off in the warm-up (unbeknownst to me). Our round felt very odd and Sid refused at fence 10 (the first part of a double). He had no poles down though, which is unusual! I rushed to get his shoe back on to jump our second round. It was going well, with only one pole falling, and then he stopped at fence 10 again! And I plopped straight off. Not ideal.

Our first Novice test was respectable, but our show jumping was a disaster. I rushed Sid into the first, leading to a refusal. I tried to get it together, but there was a lot of nervous flapping and we had two poles down.

Sid had been having a slight confidence crisis cross country with steps down, so I couldn’t believe it when I walked the course at Stafford to discover THREE steps down! I watched one of Sid’s shoes fly off as I was approaching fence three. He was Herculean, taking flyers all over the place and absolutely bossed the water combination. Sadly, I ran out of luck at the house before the second step down and he ran out. However, I circled and he flew the rest, coming home with time faults for going too fast! We now seem to have a new show jumping gremlin to defeat.

We entered the Novice at Moreton Morrell when we were on a high. However, our show jumping had gone downhill since then, so I took the difficult decision to withdraw. It wouldn’t have been fair on Sid to step up a level when we weren’t feeling confident. As disappointing as it was for me to admit that I wouldn’t reach my goal this year, it was the right decision.

I’m hoping I get to spend this Christmas with my family, but who knows what the world will look like in December? On a less serious note, I’m also dreaming of more Fairfax & Favor boots to add to my collection’ My horsey plans will consist of training, training and more training. I may be down, but I’m not defeated I got it wrong when I said 2020 would be my year – I meant 2021. Numbers are not my thing!