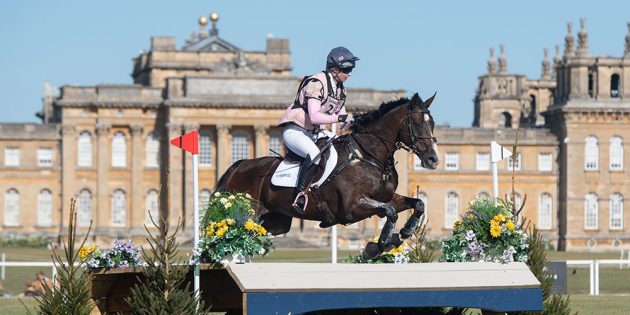 It was a step into the unknown. As Georgie Spence arrived at the Olympic venue in Tokyo, the rider gazed around, gathering in her surroundings.

Georgie (pictured above at Blenheim Palace in 2019) and her horse Halltown Harley were stepping out for the first time into an arena that was expected to play host to the latest round of Olympic competition less than a year later. The place where another handful of stars would write their names in sporting history by medalling at the 2020 Olympics Games.

But while the significance of the location wasn’t wasted on her, there was something else that took Georgie’s breath away initially.

“As soon as we got there, we were quite shocked by the weather because it was considerably hotter and more humid than we could have imagined,” recalls Georgie of her trip to Japan for the Ready Steady Tokyo test event in August 2019.

“Although we’d done various things and been in the heat chambers and get used to being hot when you’re on holiday, to be in your riding kit there, the humidity really hits you.”

It’s one of the biggest challenges horses and riders eventually making the pilgrimage over to Tokyo for this year’s rearranged Olympics will face when the Games finally get underway.

With the mercury rising to more than 30 Celsius in a typical summer – and the muggy atmosphere only adding to the heat – conditions will be far from familiar when the British medal hopefuls line up this summer.

But while Georgie was forced to carry multiple sets of clothes with her as she constantly alternated from her riding regalia to something airier, any concerns for how the horses would fare in the temperatures disappeared upon seeing the purpose-built facilities at the venue.

“The facilities were beautiful, they were second to none,” she says. “The stable barn was incredible and air conditioning for the horses made it cool in there – they were in rugs and instead of struggling to keep them cool, the temperatures were brilliant.

“Walking outside to inside the barn, there was a huge temperature change. The cross country was at a different venue and the stables were in a marquee tent rather than a permanent building, but they were still beautiful with a super temperature for the horses.

“They didn’t know a lot about it until you were on them riding, what the horses get there was as similar to home as they could have had.”

Thanks to a few days to acclimatise and armed with information from the sweat testing she did prior to the trip, Georgie and Halltown Harley weren’t deterred by the heat. The pair enjoyed a strong performance across the three days, securing a fourth-place finish in a field that included Germany’s three-time Olympic gold medallist Michael Jung and British stalwarts William Fox-Pitt and Andrew Hoy.

Although Covid-19 is likely to make the 2020 Olympics a Games like no other, Georgie says the facilities and course had all the hallmarks of an elite event, just with an added sprinkle of magic.

“You know it’s going to be different because it’s a non-European country and things can differ when you’re abroad, but in terms of the layout and the timetables, it was the same as being as at any premier international show,” Georgie explains.

“It’s nice to see it slightly on the other side when there’s less pressure and it’s a little bit quieter, but you still have the aura at the event and all the natural pressures of competing.

“It keeps you buzzed and feeling positive that you want to be at these type of places when you’re competing for the real thing. It’s these little highlights that make you get out of bed in the morning.”

And while getting on the plane to Tokyo again for the Games isn’t likely for Georgie this summer, she’s already got her sights set on when she’d like to take her real Olympics bow.

“Paris in 2024 has got to be there as one of the main goals at the moment,” she adds. “Depending on what happens with a changed Olympics this year, there’s going to be a lot of people a lot hungrier to get to Paris, which will make things a little more difficult. But that’s got to be the goal.”

If she makes it, Georgie’s next unknown step could lead her to Olympic glory.