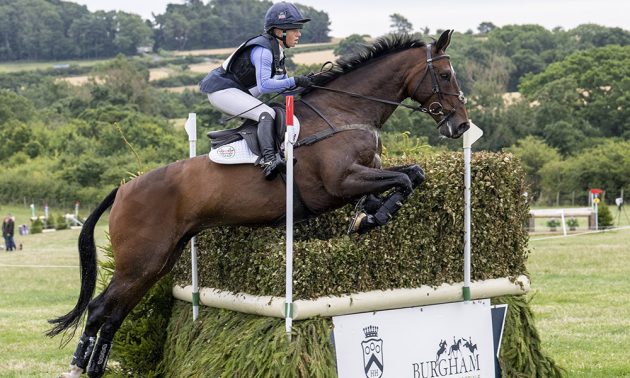 All three of Britain’s gold medal-winning horses and riders from the Tokyo Olympics – Oliver Townend (Ballaghmor Class), Laura Collett (London 52) and Tom McEwen (Toledo De Kerser) – were competing at the Hambro Sport Horses Burgham International Horse Trials in July, alongside many other top horses of the present and the future.

It was the fifth CCI4*-S victory at Burgham in recent years for world number one Oliver, who rode Paul and Diana Ridgeon’s Swallow Springs to capture section H. Oliver, who also finished second in section I on British team Olympic gold medallist Ballaghmor Class, said: “This was great preparation for my horses for their major autumn targets. Both performed extremely well and they enjoyed having a gallop on ground conditions that, considering the very dry weather, were as good as we could hope for.”

Ros Canter collared section I on her own and Alex Moody’s Izilot DHI – scoring her second Burgham victory of the weekend, after winning section A of the CCI3*-S.

Ros said: “Looking at the start list, I wouldn’t have put my name and his at the top of it this weekend, although I know he’s capable of beating the best in the world.”

Ros, who married her partner Chris McAleese the Saturday before the event, also won section A of the Howard Russell Construction Ltd CCI3*-S on Dr Mark and Wendy Egerton’s 10-year-old Cooley Copresenter on a finishing score of 30.5.

“Cooley Copresenter is a new ride for me this season,” said Ros. “We’ve been slowly getting to know each other and this is the first time I have run him competitively. He’s a lovely horse, a really genuine, happy character and he’s getting better and better.”

Piggy March was another top British rider to triumph at Hambro Sport Horses Burgham when she took section B of the Howard Russell Construction Ltd CCI3*-S on Peter Harris’s smart seven-year-old Dassett Arthalent. They concluded the competition on a score of 28.2.

Piggy said: “This is his first CCI3*-S. I came up to Burgham with a couple of seven-year-olds to start the process of getting their qualifications for the World Young Horse Championships at Le Lion d’Angers in October, so I wasn’t really expecting a win. However, he was in that position before cross country and because the course was very fair and would be educational without giving them a hard run we had a go. He grew in confidence the further round we went.”

After consistently finishing in the money all weekend, Sarah Bullimore pulled a victory out of the bag on the final day by winning the Holme Dodsworth Metals CCI2*-S on Corimiro.

The six-year-old, owned by Sarah’s husband Brett, Bruce Saint and Christopher and Susan Gillespie, was homebred by Sarah and Brett out of Sarah’s European Championships ride Lilly Corinne and sired by Amiro Z. Sarah and Corimiro led the dressage with a score of 22.2 and added nothing to that in the jumping phases.

She said: “I’m excited about his future – he’s lovely and turns heads wherever he goes because he’s got it all. Like all of Lilly’s offspring, he’s super-intelligent. This win is his just desserts.”

Sarah hopes to take him to the World Young Horse Championships at Le Lion d’Angers, France, in October.