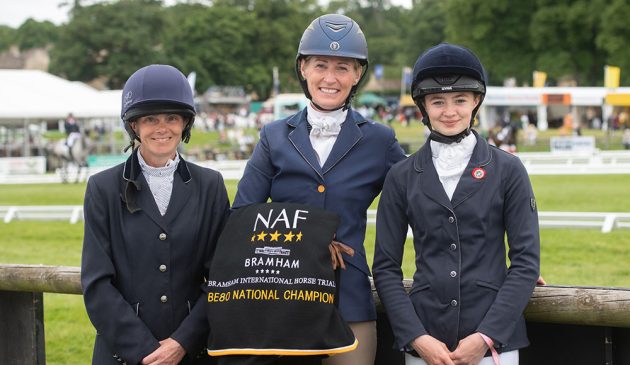 Philippa Skelton and Brian Boru III are the NAF Five Star BE80 Champions for 2022 after three days of fantastic competition.

Some of the country’s most talented grassroots horses and riders lined up for this year’s championship, having qualified at BE events across the UK. The first two days of the competition were dedicated to the precision of the dressage, with each combination performing their test against the stunning backdrop of Bramham Park.

Helen White and EPA Murray took an early lead, with a score of 29.0. Amelia Maycock and Carnsdale Ghostbuster were lying a close second on a score of 29.5 and the eventual winner, Philippa Skelton (pictured top middle) and Brian Boru III, just 0.3 penalties behind them on a score of 29.8.

With less than 10 penalties separating the entire field after dressage, there was plenty to play for heading into the final day, with the show jumping and cross country tests to come. The team at Bramham had done a wonderful job and the courses looked fabulous, especially the cross country, which had been beautifully dressed and ran alongside some of the 4* international fences.

With the leaderboard so close, clean sheets were the order of the day and Emily Gaskell (pictured top left) and Callowfeenish Cailin set an early standard. They had been lying in fourth place after dressage and, as just the third combination to take on the courses, they sailed round to get a double clear and no time faults. This left them on a score of 30.0 and very much put the pressure on those above them.

NOT A SECOND OVER

By the time Philippa and Brian Boru III came to take on the cross country, they were the only combination that could deny Emily and Callowfeenish Cailin the win. They needed to come home clear inside the time – just one second over the optimum time would have moved them outside of the top three.

The pair had the round of their lives and finished on their dressage score of 29.8 to be crowned champions.

“It was definitely a meaty course, but I had the best ride I’ve ever had and he was absolutely amazing,” said Philippa.

“It’s just the best venue ever. I’ve come from Bristol and it was a long journey but worth every minute as everyone has been amazing.”