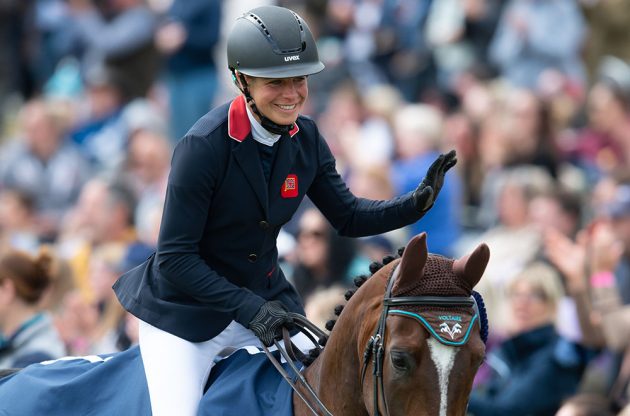 It was a win for Izzy Taylor (pictured above) with her own and British Eventing Chair Mark Sartori’s 11-year-old gelding Monkeying Around in the CCI4*-L at Bramham 2022.

From a strong field of more than 50 starters, the Brits dominated by taking seven of the top 10 placings. It was Izzy, though, who took the lead on Saturday after the cross country with just 1.2 time penalties to add to her dressage score and held on to it through the final show jumping round to conclude what were three great days of competition.

Entering the show jumping arena, Izzy knew she had a few time penalties in hand but needed to jump clear if she was to hold on to the lead. Doing just that, she finished with all fences untouched, stopping the clock just three seconds over the time allowed to claim the win. Taking the title would have been a great birthday present for Izzy, who celebrated her 39th birthday on Saturday.

After the presentation, Izzy said: “I’m just thrilled with him. He [Monkeying Around] won his first 4* at Burnham Market in 2020 and to then come here just proves to me that he is a proper horse. I’m thrilled for everyone that’s involved with him.”

It was a particularly strong line-up for Great Britain. Ros Canter on Pencos Crown Jewel, owned by Annie Makin and Kate James, took second on a final score of 28. This saw them finish 1.6 penalties behind Izzy, who had finished on 26.4. Kirsty Chabert, with Opposition Loire, finished in third place on 32.5 penalties.

Ros Canter and Izilot DHI, owned by Ros and Alex Moody, proved too strong as they held off a competitive field to win the Land Rover CCI4*-S.

With a host of talented horses and riders breathing down her neck at the top of the leaderboard, Ros produced a nerveless performance to take victory. Ros and Izilot DHI had come into the final day of competition as overnight leaders and started in strong fashion over Di Boddy’s show jumping test, stopping the clock a single second over the time to add 0.4 of a penalty to theirdressage of 23.5.

By the time they took to the cross country course, Ros knew she could exceed the time by six seconds and no more. As the pair pulled up the final hill, the time was ticking – it was going to be close. They jumped the last, the Goodbye Flys Finale, and pushed to the finish line – three seconds over and the title was theirs.

In the British Horse Feeds U25 CCI4*-L, the win went to France and Héloïse Le Guern. She was joined on the podium by British duo Greta Mason in second, who also takes the title of British U25 Champion, and Heidi Coy in third– both riders making a six-place rise up the leaderboard from their dressage positions, thanks to clean jumping sheets.