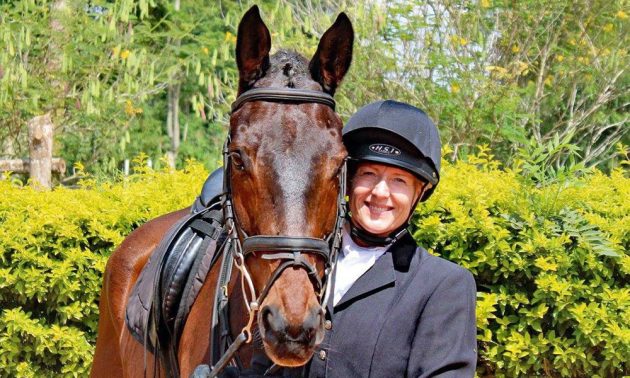 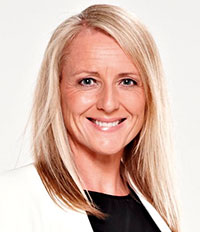 Q: You’ve covered every Olympics since 1996 and despite your love for horses, this was your first official posting to cover eventing. How did it come about in Tokyo?

This was my seventh Olympics, but I’ve always covered different sports. Because of Covid, everything changed and the Five Live team went from being 60 in Rio to nine in Tokyo. Only two of us were broadcasters and I was the general roving reporter, covering all sorts of sports.

I’ve always loved horses and while Aggers [Jonathan Agnew] leads the equestrian coverage, my role was to be his eyes and ears on the ground because he was hosting the coverage back in the UK – although I did some commentary too. I was like a kid in a sweet shop being at Equestrian Park.

Q: You were reporting for the BBC in Equestrian Park as Team GB clinched their first Olympic gold in 49 years. What was that like?

The interesting thing about Tokyo is that because there were so few people there to witness it, to be able to say you were there when the British team won gold for the first time since the 70s is a big deal.

I’m aware of the privilege of being there to see it and I did feel that weight of responsibility in terms of bringing the sport to life for people. Many people who would have travelled to watch it normally and be there with family or as connections to the horses and riders weren’t able to. So it was a different Olympics for that reason – you really were the eyes and ears on the ground.

Q: As you say, not many people got to experience the venue in Tokyo. So tell us what it was like to be there…

Equestrian Park was a first-class facility. There it was in the middle of a suburban area in Tokyo, rising ike a mountain. I was up in the back and looking out, so I could see they had four warm-up arenas just for dressage, as well as the main arena, stabling and a small cross country course – although the cross country for the competition was held in a different area. It was a privilege to be there and watch with the whole of the Tokyo skyline as a phenomenal backdrop. As a place to hold equestrian sport, it was absolutely stunning. 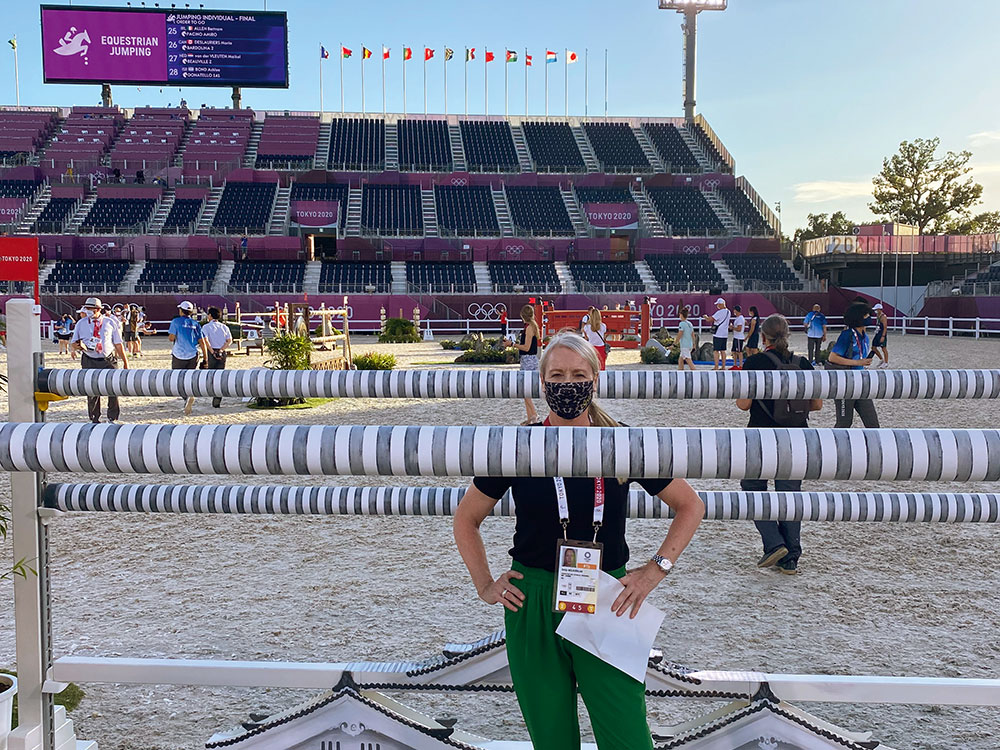 Q: What was it like to be there with no fans, though?

You can’t escape there were no fans there and that was a massive shame. But Tokyo was in the middle of a lockdown and cases were spiking pretty severely.

There was this moral dilemma before the Games: ‘should we be here at all?’ because of what was going on in that particular part of the world. But once the sport started, it built this momentum where it felt like it was the right thing to do – for the athletes as much as anything else.

Inside the venue, there were no fans but there were lots of volunteers and support staff for the nations. They all created a lot of colour and noise, so I still felt there was a spectacle. The presentation around each event still went ahead, and there was music, colour and light shows in some of the indoor venues. There was a real effort to make the athletes feel like it was the pinnacle of their sport.

At the equestrian events’ prize giving, there were still horses cantering around the arena afterwards with the music and the flags. I’d get goosebumps because I realised this was an Olympic Games; this was really special and we were witnessing moments of history. I left every evening going, ‘wow’.

When you look at the record books in years to come, there won’t be an asterisk saying that was the Covid year, you’ll just see that Team GB won team gold in 2021.

Q: When did you realise the team were going to win gold?

With cross country you never know what’s going to happen. So while they all had brilliant dressage rounds and they were bang in contention, it was only at the end of the cross country when they had four fences in hand for the show jumping that you thought with riders of this quality it’d be like missing an open goal in football.

The only question mark I had was if they could transfer that into the individual medals. That’s where it got much tighter and with Tom McEwen being the only one getting an individual medal, it shows how tight it was.

Q: While this was the first time you covered the Olympic eventing, you did experience Greenwich Park at London 2012 too, right?

The idea of asking for a day off during the Olympics because it’s so busy is, ‘how dare you?’, but I begged my boss to go to the cross country phase of the three-day event at London 2012. I’d asked because my sister and her daughter who live abroad were coming over and had tickets, so I really wanted to go. I ended up with the radio mic and went off on the course to do little colour reports as the British riders were going round. But 2021 was the first time I was broadcasting and covering eventing at an Olympics. 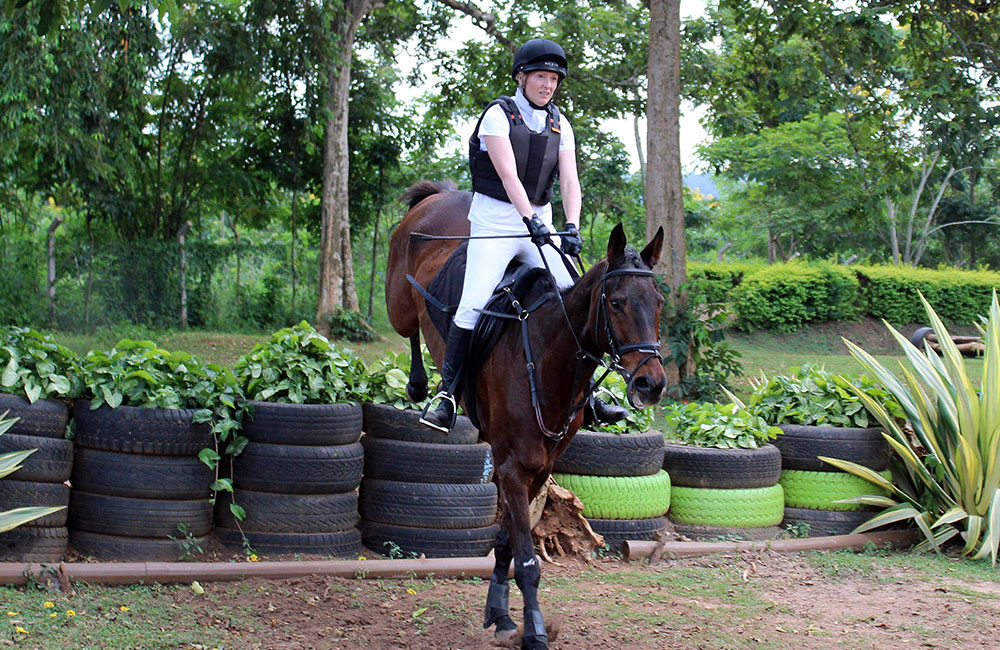 Sonja is used to competing in East Africa

Q: What is it about eventing that you love so much?

The cross country! I’m not the biggest fan of the dressage tests, but I’m happy to do them just to get the chance to do cross country. I like show jumping too, but I find it harder because of the accuracy you need, whereas I find cross country so addictive. It’s a tremendous test of a rider’s skill and the relationship between their horse and themselves, and it’s so rewarding when you get it right.

I used to love watching Mary King jump, as she sat right back and took on the fences. Timing it just right to get over a big fence cross country is such a skill and so thrilling to do.

The adrenaline rush, the thrill of the speed, the challenge and buzz of pointing the horse at the middle of a fence and sitting back, and the horse locking on to it, over you go and that rush of being in the air and landing, and saying, ‘I just want to do that again and again’. And you get to because there are so many more obstacles waiting for you around a cross country course.

I don’t ride as often now but as soon as I get to that first fence, I’m back in the zone and say, ‘let’s do this’ – it’s such a buzz. I absolutely love it.

Q: Does it make you appreciate the top riders, then?

Yes, having ridden yourself helps you realise how brilliant the Townends and the Colletts and the McEwens of this world are to be doing it at that level. I think it gives you a greater understanding of how incredible these athletes are.

Q: You were horse-mad as a kid, but what was it that enticed you into eventing?

My sister emigrated to Uganda several years ago and she bought some land and built stables for the horses she was going to have out there. She was the first person to bring horses to Uganda; they didn’t exist before because of African horse sickness.

She started it as a livery yard and stables and had a job elsewhere. It sort of mushroomed and she turned her hobby into an extremely successful business with 40-odd horses and ponies. She built stables for all of them, has a dressage area, two show jumping arenas and a massive cross country course. Anyway, I started visiting and it turned into me riding again and her teaching me. Then we started doing competitions in Kenya [because there weren’t any in Uganda]. 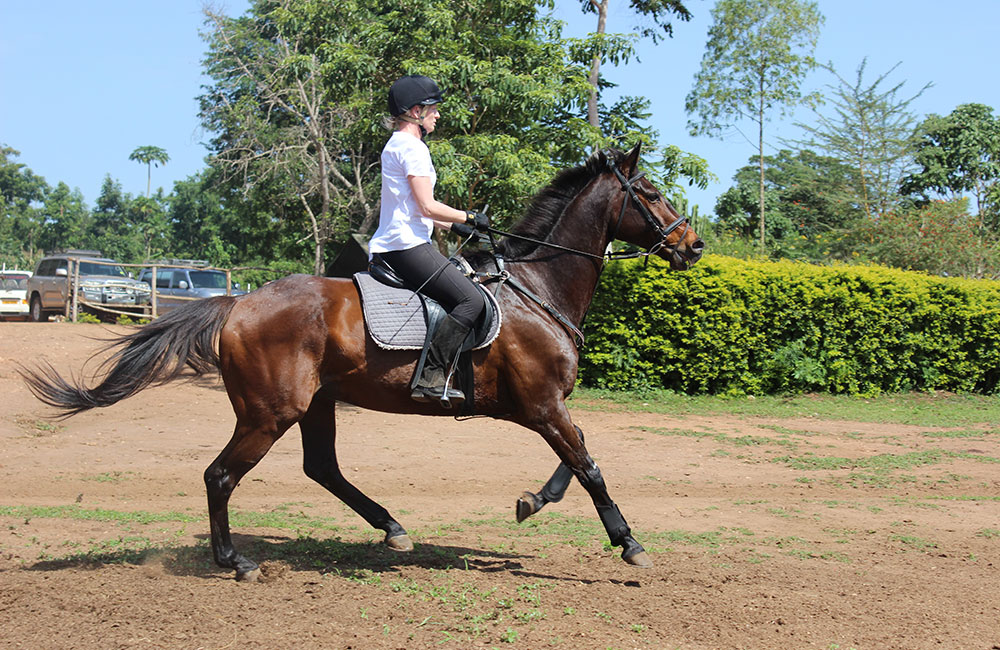 The events are across two days, with dressage on the first day and cross country and show jumping the day after. We do shows in the most amazing places, with stunning backdrops, and in Nairobi itself. It’s not unusual to be riding cross country and there be a giraffe nearby because a lot of the cross country courses are in the game parks or wildlife areas.

The equivalent of what I compete at is probably BE90 over here. I wouldn’t be doing Open, I’d do Novice.

Q: Tell us more about your sister’s set-up…

My sister is extremely talented and she’s got this enormous drive. She’s quite the phenomenon and her story is amazing on its own – to go and do that in a different country where she had no staff or anything. A lot of her staff come from the village she’s in, so it’s providing employment. She’s taught all these local Ugandans to ride, about horsecraft, horse welfare, how to clean tack, how to put tack together, brushing boots, everything. She’s now teaching kids to ride that would never have ridden if that facility hadn’t been there.

Q: What’s held you back from competing in the UK?

It’s interesting. There was a period of time when my niece, Katie, was at Cranleigh school, which has an equestrian centre. My sister being my sister decided Katie would have a horse while she was at school so she could be part of the equestrian team. While she was at school, this phenomenal horse was just sitting there, so I’d go down and take him out and have lessons with one of her instructors.

I was lucky to have a three-year window when there was this stunning event horse, but they sold him when Katie went to university.

I’m tempted to get a horse share, but it’s so difficult with my job because it’s unpredictable in terms of the hours. If somebody asked, ‘can you ride every Wednesday and Thursday?’, I’m not sure I could because I might suddenly have to go to England rugby training to film. So it’s become that I ride at my sister’s place, although I haven’t been since Christmas 2019 because of Covid. I can’t wait to get back there!