Against the odds: David Howden

Establishing a new event is challenging at the best of times, but doing it in the middle of a global pandemic is something else. Catherine Austen spoke to the formidable David Howden about doing just that

All the amazing comments from the riders are what make me smile most,” says David Howden. It is a few days after the inaugural Cornbury House Horse Trials has concluded, and David – the event founder and president – admits hat he is still on a high.

“It was a fantastic team effort and everyone’s energy was so uplifting,” he says. “I have had the most incredible feedback from riders, owners and those people who watched our livestreams saying how much they enjoyed it, what a spectacular setting Cornbury is, how well organised the event was and that they can’t wait to come back. That means a lot; it has been a huge undertaking to get Cornbury House Horse Trials off the ground, and such positivity and buzz makes it all worthwhile.”

As older readers of British Eventing Life will remember, Cornbury has hosted eventing before. From the early 1990s to 2000, there was a popular Novice and Advanced event – Cornbury Park Horse Trials – which was an important pre-Badminton and later pre-Burghley competition, and attracted all the top horses and riders of the day. Organised and with a course designed by Mike Etherington-Smith, Cornbury Park went into abeyance in the foot-and­-mouth year of 2001, and all that remains now are the traces of a few fences dotted around the park in front of the imposing, Grade 1 listed, 17th-century house.

But in December 2017, David Howden, founder and CEO of Hyperion, a large insurance-broking and underwriting group, moved into Cornbury House. He says: “An old friend, Luis Munoz-Rojas Entrecanales, who breeds horses in Spain, sent me a wonderful video clip of Cornbury Park Horse Trials and said: ‘David, now you are at Cornbury, you’ve got to do the decent thing … ‘ I had no idea there had been a horse trials at Cornbury. Luis has been my business partner for many years, and Richard Clapham, whose family has been deeply involved in eventing for many years, runs one of our subsidiary companies. Those things, combined with my sister and my children’s passion for horses and eventing, meant that an idea was sparked that has now become reality.”

David’s sister Miranda Fairhurst was the horsey one of the two as children. “However, my daughters loved riding – Miranda found them their first ponies – and took up riding when I was 50,” David explains. “My eldest daughter, Talitha [21], rides but isn’t as mad about it as Jemima [16] and Kitty [13] – they both event, and I started hunting because of them. My horse Roman used to belong to a great friend, Toby, who told me I had to start hunting, that it was far more exciting than shooting or anything like that. He tragically died of cancer a few years ago, and now I have Roman and I always hunt with Toby’s flask on my saddle in memory of him. I have also bought a new horse to hunt this season.”

Jemima and Kitty both compete in BE events, and Jemima is about to move up to Novice level with the seven year old ALS Russian Rolex. All three of David’s daughters, and his wife Fiona, played an active part in the event and are very enthusiastic about its future. 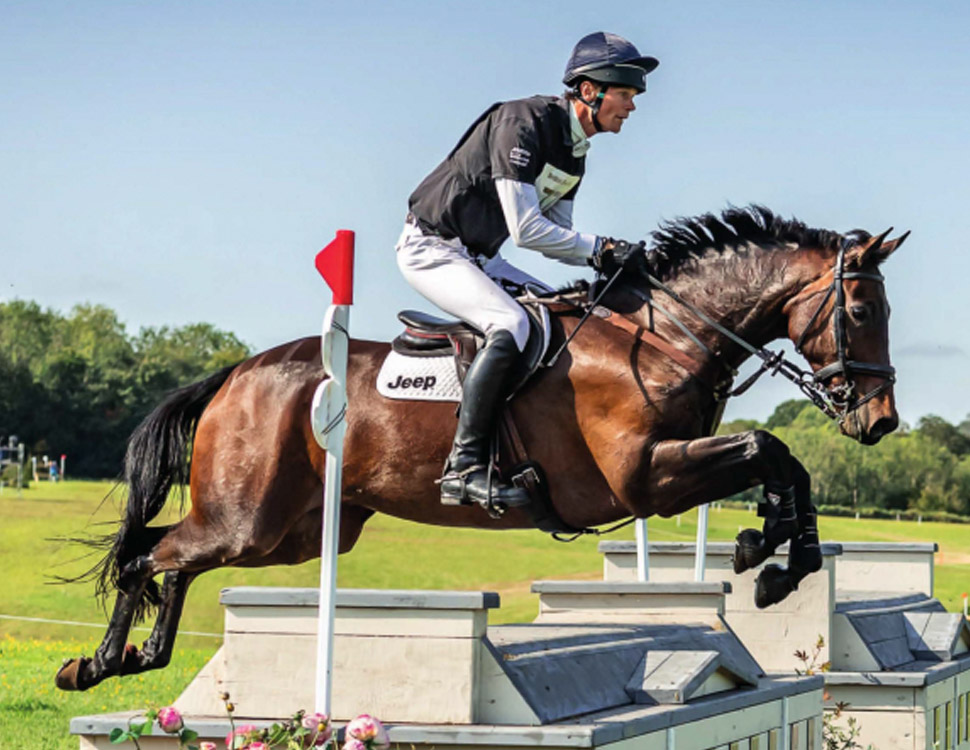 David admits that he had no idea that it wasn’t as simple as just saying you wanted to put on an event, and it took two years to get into the BE fixture list, slipping into Gatcombe (2) ‘s spot when that event came to an end.

“We then get the excitement of being granted a date, we start full-steam ahead – we were already quite far behind because we had no infrastructure here – and it is quite a short timetable anyway, and then we have an incredibly wet winter. Then, after all that, along comes COVID-19,” he laughs. “There was very little we could do over the winter.

We were washed out and that was quite an issue because for me this has always been about putting on something that was about three key tl1ings – the riders’, the horses’ and the owners’ experience. I really wanted to focus on the sport. To do that, everyone who knows far more than me about eventing said I had to have exactly the right conditions for the horses.”

David, with the help and back-up of organisers Richard Clapham and Pattie Biden, and course designer David Evans and course builder Adrian Ditcham, held his nerve and refused to compromise those principles.

“It has meant a huge amount of investment,” he admits.

An immaculate, flat show jumping arena was levelled out of the rolling ground and, because of last winter’s wet conditions meaning it was impossible to seed it and grow sufficient grass cover in time, it was turfed. Entirely new cross country tracks designed to be challenging and bold, but also easily visible for spectators, were built, and massive amounts of groundwork were done.

David says: “The only good side of COVID-19 was that David Evans was supposed to be in Japan [he and his team are the Olympic 2020 course builders] and he was here all year instead! The course looked just amazing.

“But any chance of getting any help on the investment front, which has been pretty substantial, went out of the window; we were not going to get any sponsors at a time when we cannot have spectators. But I said we are going to run, and we ran to the same high standard as we would have done without the pandemic.

“It has been a real challenge, and has taken real passion and determination to want to put it on and to put it on to the very high standards we always envisaged. We put up by far the best prize money available in eventing in this country this year. I hope all of these things show how committed we are to the sport and to Cornbury House Horse Trials.” 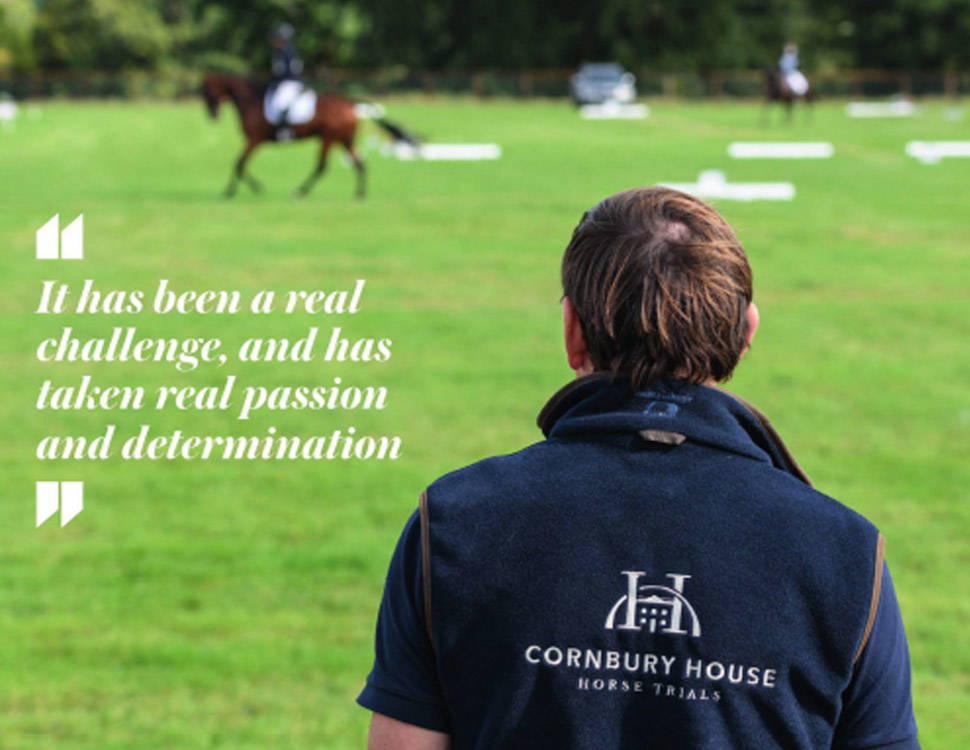 Another very significant decision – and investment – was to livestream all the show jumping and all the cross country from all the classes: Intermediates on the Friday; Novices on the Saturday; and the CCI3*-S and CCI2*-S, along with NAF Youth Performance sections at both of those international levels, on the Sunday. It was the right decision, and thousands of people from all over the world loved the high-quality, free coverage, particularly in a year when access to live sport of any kind has been so limited.

“The livestream was a huge hit,” says David. “Owners who weren’t able to come loved watching their horses. Eventing fans from countries such as New Zealand, France, Australia, Japan and South America logged on to watch, too. “Hopefully some people who aren’t so familiar with the world of eventing may have seen what a terrific sport it is and what a stunning venue we have in Cornbury.”

“I want it to be a different experience. For those coming, I want it to be about the setting, sustainability and the local community. I hope everything will be local to Wychwood Forest – we are right in the heart of 2,000 acres of Wychwood Forest – and that we can give people a lovely day out. Many events seem quite similar to each other, and I think we can do things a bit differently. I think it will be fun to challenge the established norm.”

Cornbury House has certainly made a highly successful and eye-catching debut. Its organisers have big plans – and high hopes – for the future, and the drive, energy and passion to make them
a reality.