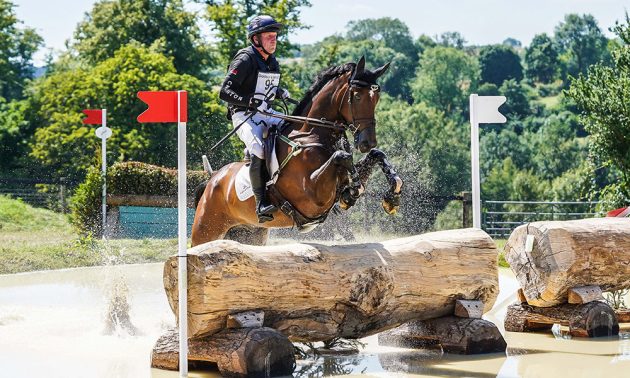 A million reasons to celebrate at Gatcombe

There was general delight – for riders, owners, spectators and officials – at the return in August of the Magic Millions Festival of British Eventing for the first time since 2019 and much anticipation as to who would take the four national titles on offer.

Oliver Townend became British National Champion for the third time after finishing second (best of the British) in a thrilling finale to the Magic Millions British Open. Top honours in this showpiece class went to New Zealander Tim Price.

The scene was set for a nail-biting climax as the highest-placed riders chased each other around Gatcombe Park’s famously spectacular bowl. Tim’s good time of four time penalties on Joe and Alex Giannamore’s spring-heeled jumper Vitali was good enough to keep him just ahead of Oliver on the Chamberlayne family’s Dreamliner.

“He’s a really good jumper and he was ready for this,” said Tim of the 12-year-old Holsteiner gelding originally produced by fellow Kiwi James Avery.

“It’s the perfect preparation for Burghley. The course was good – they’ve done a great job with the ground here.”

Pippa Funnell, the British Open champion in 1992 and twice a national champion, led after the first two phases and was the very last rider on course with the majestic, long-striding Billy Walk On, but a tally of 8.4 time penalties dropped her to third place, 2.8 behind Tim and just 0.7 behind Oliver.

There was more success for Oliver when he finished first and second in the Dodson & Horrell British Novice Championship – his fifth national title in this class. He won on a new ride this season, Sir John Peace’s French-bred Finley du Loir, the dressage leader, and was runner-up to himself on Chris Gould’s Samiro Cruz MC, a seven-year-old Irish-bred gelding he’s been competing since 2020. 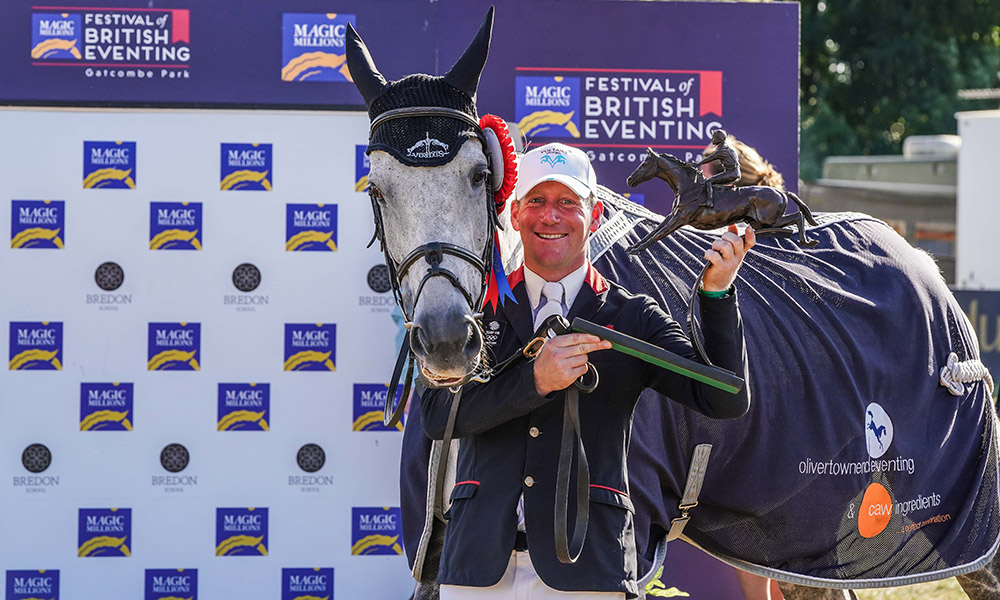 Oliver, who had 10 rides across the weekend, strongly emphasised the educational benefits of taking a horse to Gatcombe: “Now I know I’ve got the best novice horse in the country,” he said. “I love it here and you learn a lot about your horses. They will come on a lot for the experience and you learn a great deal about their stamina.

“I think it’s an important part of a horse’s education and you only have to look at the previous winners that have gone on to be superstars.”

The new British Intermediate Champion described his winning mare, Luna Mist, as having ‘huge bundles of potential’ and heaped praise on the organising team at the Magic Millions Festival of British Eventing.

“I know I’m biased because I live here [at Gatcombe], but it’s not easy to put on a horse trials in this weather and they have pulled it off in spades.

The cross-country course is super flowing and the going is excellent; the horses are comfortable on it and leaving a good print.” 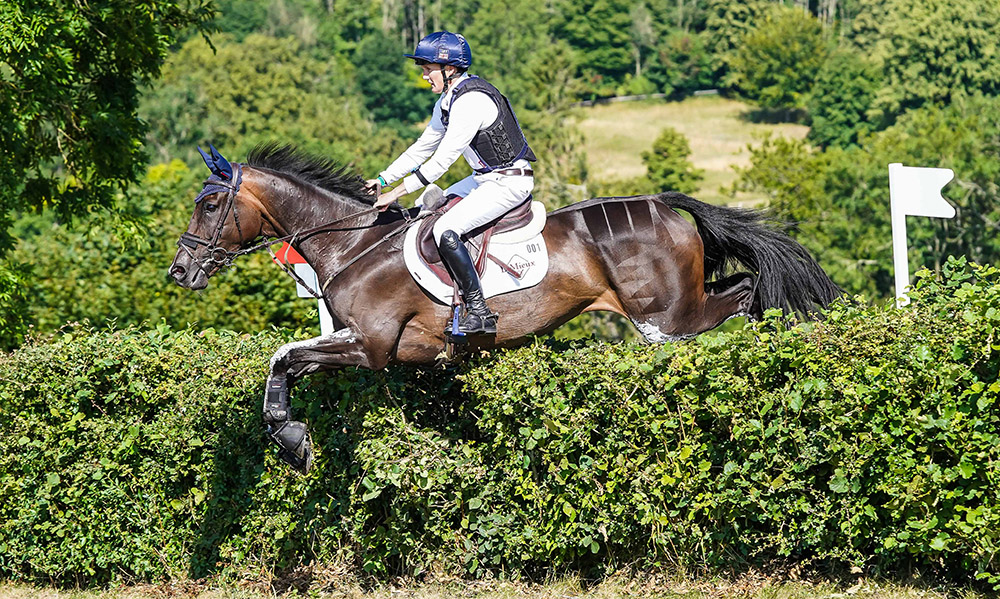 Amy Barlow, winner of the TopSpec Challenge for the Corinthian Cup, a National Restricted Novice Championship, said that the Magic Millions Festival of British Eventing at Gatcombe Park was the ‘pinnacle’ and that ‘we can’t stop crying’.

Amy, 29, from Martock, Somerset, led going into the cross country phase on Charlotte Schnicht and Sue Shenkham’s Iwan, a handsome bright bay gelding. Amy, who has a school and retraining of racehorses business, bought him as a just-broken four-year-old from a dealer.

“He was sharp and skinny and everyone thought I was mad, but he was a good jumper and I liked him because he was cheeky,” she said.

“He doesn’t normally like firm ground, but they have done such an amazing job at Gatcombe and he just loved it.”

BE CEO Helen West said: “We are incredibly grateful to HRH The Princess Royal for hosting this prestigious Championships. Gatcombe Park provides a unique opportunity to ride on proper terrain, which makes the cross-country test particularly influential. Congratulations to this year’s deserving BE National Champions.” 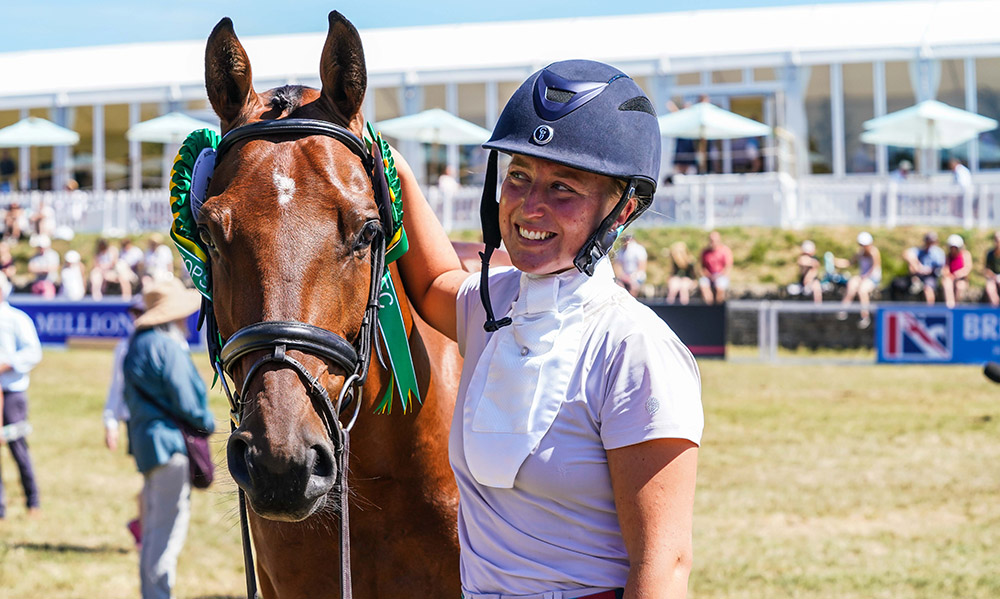 There was a great piece of news for the sport over the weekend as it was announced that Magic Millions, title sponsor of the Festival of British Eventing at Gatcombe Park, had signed a further three-year deal, taking its generous commitment up to 2025.

Event Director Peter Phillips said: “This is fantastic news for the festival team and is a wonderful endorsement of both the sport of eventing and of this very popular weekend. The support and commitment from Magic Millions to 2025 will enable us to continue the evolution of the Festival of British Eventing to make it even more special, including for the 40th anniversary of the horse trials at Gatcombe next year.”